Sitting At St. Scholastica's - (Im)Patiently Waiting on the Powers That Be 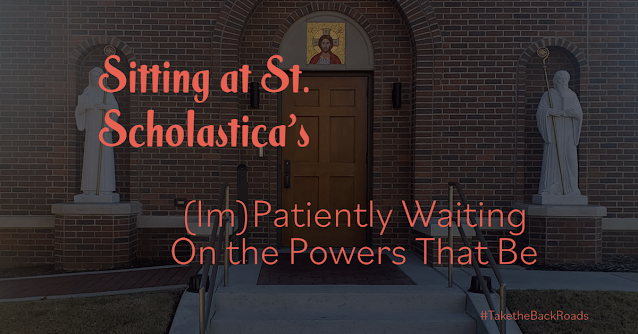 Dear Henry,
It's not a secret that I have struggled to find a "place" here in Tulsa. Not that there is anything wrong with the city, it has an amazing history and architecture, it's just that it's loud, with a lot of traffic and I haven't been able to get comfortable here.
I have been amazed by how disconnected I have felt with the area and, as I came from a small parish in Northwest Arkansas to the larger parishes of the Broken Arrow/Tulsa area, I felt adrift and disjoined at church.
Even finding peace at St. Scholastica's, my closest adoration chapel (think a mediation room with the Divine Presence) has been difficult and awkward. The first time I came to the chapel, I set off the building's alarm.
I managed to return to St Scholastica's after the alarm incident,  and, after several visits that were plagued by always finding a wobbly kneeler that clatters on the floor of the sanctuary every time I take a breath, I was reminded of one of my life's biggest truths - I will always be (barring another miracle) quite uncomfortable and extremely awkward.
However, I still wrestled with the question, "Why has this move been so hard?".  The opportunity to move to Tulsa was an answer to many prayers and so, I couldn't figure out why it felt so challenging and why I was struggling so much to adjust.
In an effort to connect with others and despite the fact that we hadn't found our home yet, I registered at St. Benedicts (the only parish close to me that didn't sing the Our Father during Mass) only to have a COVID spike hit the area, which shut down all of the extra activities and classes, making any kind of new connections difficult and, honestly, I was struggling with the isolation of a new town and frustrated with what I thought was "God's Answer".
I began to get clarity while listening to the first of this year's Ascension Presents Advent meditations. In the vlog, Sister Miriam James talked about Mary's faith in God's plan for her and her willingness to wait for God's time.  I hadn't ever considered how Mary must have felt during her early pregnancy, but, Sister Miriam James spoke of the period of time when Mary, after having had an incredible spiritual experience, and now pregnant, confides all of this to Joseph and is immediately confronted with the news that he will divorce her.  Mary (somehow) held on to her faith that God would somehow work the whole thing out and, of course, He did. Sister Miriam James's point was that sometimes you need to allow God space and the time to finish His plans and that sometimes, no matter how adrift you may feel, the best thing to do is wait.
Patience has never been one of my virtues.
Still, I kept pleading with God (on a wobbly kneeler) to get me out of this apartment and into a house, with a yard and porch, but we were plagued by a lack of homes for sale in the area and I was getting a bit frustrated.
Then our house appeared. In Owasso, a smaller suburb to the North of Tulsa and about twenty minutes away from where we thought we would be and where we were looking.
It was then that I realized why I couldn't seem to connect with anything here, I wasn't meant to and I just needed to give God the time and space to finish.
This process reminded me of another Ascension Presents vlog, this one by Father Mike Schmidt, where he talks about wrestling with God. Father Schmidt mentions that sometimes you are struggling and fighting with God about a path that He didn't really want you to follow anyway and I realized that by trying to find a home in a city, I had been fighting my own shadow.
I look forward to getting into the new house at the end of the year and I will trust that I will find a community to connect with there.
xoxo a.d. elliott
Adventures Oklahoma Pilgrimage Religious
Location: Tulsa, OK, USA