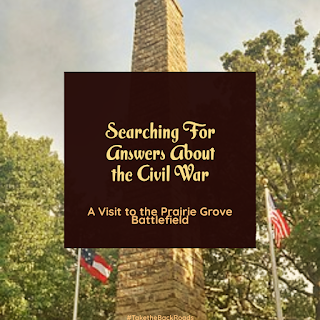 It occurred to me that, despite living in a former Confederate State for more than four years now, I still do not understand the Civil war any more than I did when I visited the  Pea Ridge Civil War Site, four years ago and thought, that I would investigate the second Civil War battlefield in the area.

The Battle of Prairie Grove took place on December 7, 1862.  It was a confrontation between the troops led by Confederate General Thomas Hindman and the Union Troops under Generals Herron and Blunt.

The battle took place along a ridge located on the property of Archibald Borden. He and his family had just sat down to breakfast when a collective group of around 20,000 men converged on their property and began fighting.

I walked through the battleground site and was staggered by that number.  The site isn't that big and 2,700 men would have been stacked up like cordwood on that hill. 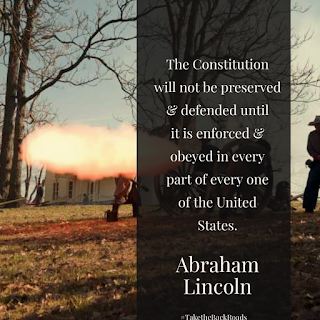 While the Borden family managed to escape any injuries during the fight, their house was burnt to the ground.  The one that stands at the park is the one the family rebuilt after the war ended.

The park is very well set up, it has some of the historic buildings of Prairie Grove on a green and of course, the Borden house. There is a self-guided mile-long walking loop that takes you through the ridge where the bulk of the fighting took place.

I didn't come away from the battleground with any more insight into why a person could believe in owning another person was ok and I mourn the enormous number of lives lost because so many people refused to let that belief go. The current estimate of the Civil War death toll is around 618,222, but after reading Drew Gilpin Faust's book: This Republic of Suffering, I understand that we will never truly know how many soldiers died during the war. We will never know, for sure, how many civilians were lost either.

And I think, finally, what makes the Civil War so hard to come to terms with, is that the "enemy" was also an "American".

Still, I hope the battleground sites remain open.  We (as a nation) can't ever forget this happened.