Peaking Into Pea Ridge: A First Look Into the Civil War 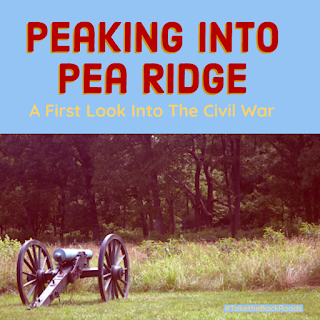 The Battle of Pea Ridge was a Civil war battle that occurred on March 6-8, 1862, in Northwestern Arkansas.

After Confederate troops were pushed out of Missiouri by Union General Samuel Curtis, the Confederate troops, under Major General Earl Van Dorn attempted a counter-offensive here, along a ridge near Sugar Creek.

The battle is also known as the Battle of Elkhorn Tavern because the bulk of the fighting took place on the grounds of the area pub. There is a reproduction of the tavern at the park (the original was destroyed during the fighting). 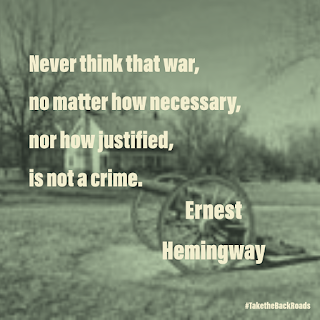 The battle ended in the Union's favor.  With the Confederate army leaving the area.  This action killed 203 Union soldiers, wounded 980, with an additional 200 soldiers missing.  It is estimated that the Confederate soldiers had around 2,000 soldiers killed or wounded, although, no one is really sure.

I must admit I don't know much about the Civil War and need to do a bit more research.  I am absolutely flabbergasted (still) by the fact that it happened at all, that slavery persisted as long as it did, and that, we couldn't, as a country, figure it out.

I believe that Ernest Hemingway said it best when he said "Never think that war, no matter how necessary, nor how justified, is not a crime."  I think this is doubly true in regard to a war that tore a country apart.

Because I spent my life in the West, I was never really confronted with the thought of it, but now that I'm in the South, it's everywhere.
I think this part of American history is going to be the hardest to get used to.

I let you know what I come up with.