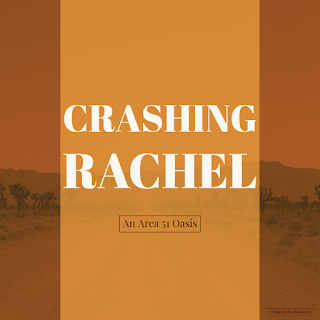 I have been totally enthralled the news surrounding the "Storm Area 51" fiasco that is supposed to take place this Friday.  But only because I have been to Area 51 and Rachel Nevada and only because I can't imagine this turning out in a way other than comical.

If you haven't heard about this yet, let me fill you in. Back in June, a college student created an event on Facebook called "Storm Area 51: They Can't Stop All of Us" as a joke.  Only everyone decided to attend....right now there are currently 2 million or so people who plan on attending.  Fearing the worst, Matty Roberts (the student) began coordinating with Connie West, the owner of the Lil A'le'inn in Rachel Nevada to host a festival.

But that partnership has come to a close, with Matty Roberts now calling the party off and throwing a party in Las Vegas.  Connie West, however, is still planning on a potential party, however, just in case.

If you do decide to go to Rachel Nevada and drive the Extraterrestrial Highway, you should probably know what to expect.  I can help you with that because my son and I drove it a few years ago.

It is important to note, there are no gas stations.  Zero. Get gas in Crystal Springs or Tonopah.  You will not get another shot and it is a very long walk of shame and an incredibly expensive tow bill.

Be prepared for a rather boring drive.  The reason that there is a military base in the middle of nowhere Nevada is that there is nothing there. It is the perfect place to test and perfect aircraft, it is a dry, rocky, barren desert, full of sagebrush and there are few people to disturb.  The Nevada desert is harsh and hot and doesn't have a lot in the way of scenery. Of course, if you actually saw an alien spacecraft, the trip would be far from boring.

We didn't see any spacecraft, but we did make the drive on a Wednesday

When you get to Rachel Nevada (its a logical turn around spot, unless you are continuing all the way to Reno) you will be utterly shocked by the size of the town.

When we were there in 2015, the town was a restaurant, with a few rooms, motel style in the back, and a space for camping.  There were a few farmhouses in the distance.  From what I understand, not much has changed.

You do remember what I said about no gas station right?

If you decided to make the drive, I do recommend stopping for a bite to eat at the Lil A'le'inn, they put together a pretty good burger, have quite a bit of memorabilia, and manage to make a trek into the middle of nowhere Nevada rather fun.

I don't know if I recommend going this Friday though, that seems like quite the crowd.