Calling On The Capital: A Weekday Getaway to Oklahoma City. 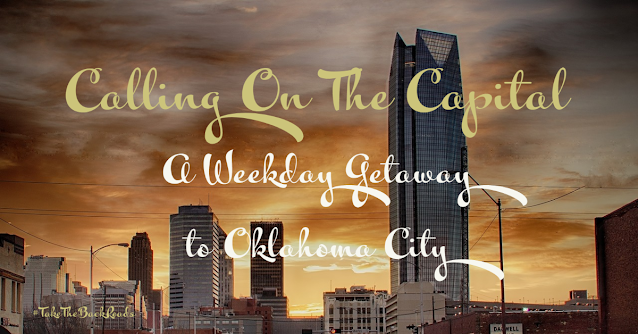 I've just gotten back from a quick road trip to Oklahoma City and the question that I seem to be asked the most is "Why would you want to go there?" And while I understand the question (Oklahoma, as a whole, is an underrated gem), I assure you there are plenty of reasons to stop in Oklahoma City.

Oklahoma City was founded on April 22, 1889, when the "Unassigned Lands of Indian Territory"  were opened for homesteading to people of non-Native American descent.  There was a mad rush for this land and, within a few hours of the gun start at noon, 10,000 people converged on the area to stake their claim. The movie "Far and Away" portrayed a different land rush, but the movie dramatized a land rush well.

Because of an early build up of infrastructure, including rail lines, Oklahoma City was able to support  large stockyards, and gaineries and when oil was discovered in 1928, the city was able to really boom.

The Great Depression and the Dustbowl did a number on Oklahoma City economics though. Not only did the drought wipe out the crops and strain ranching resources, demand for all goods, including oil, fell dramatically and Oklahoma City was hit hard. The city would have a large  "Hooverville" alongside the North Canadian River and several active Civilian Consevatjonv Camps until the influx of airmen to Tinker AFB during WWII boosted the economy. The city would thrive until the oil began to run dry and the "stagflation" of the 1970s and 1980s decimated the city.

Oklahoma city's urban renewal began in 1992, when the mayor Ron Norick was able to gain the support and resources to fund a large-scale urban renewal program,  It was during this time that the Bricktown canals were built. It was also the time of the Oklahoma City Bombing, an event which killed at least 168 people and injured almost 700 more. The bombing is still considered to be the worst act of domestic terrorism to have occurred in the US. 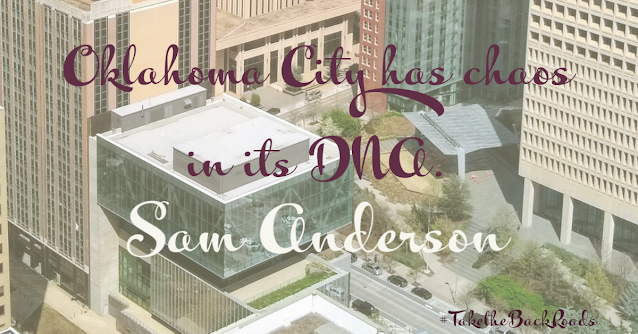 Quite a few celebrities call Oklahoma City their homes, including the prima ballerina Yvonne Choteau and the actor/writer/director/producer Ron Howard. The entire line up of the Flaming Lips come from the Oklahoma city area, as does the author Ralph Ellison.  My favorite native of is Gayla Peevy (the singer of "I Want A Hippopotamus For Christmas). Oklahoma City is also where the first parking meter invented (read about it here)

This is my second visit to Oklahoma City, and the first that I really got to sightsee.  I stayed at the historic Skirvin Hotel, a beautifully appointed, art deco hotel built by William Baised "Bill" Skirvin, an Oklahoma oil and real estate tycoon. The hotel, which first opened in 1911, fell into decline with the city, and closed in 1988. It was part of city's urban renewal projects and the city partnered with the Hilton Corporation for its restoration and in 2007, the hotel was restored with historical accuracy and reopened.  Like any historic hotel, the Skirvin has a ghost. The hotel is supposed to be haunted by the spirit of a former maid, who, jilted by Mr. Skirvin, lept from one of the widows with her infant child. There is zero proof of the maid story, but, there has been paranormal oddness in the hotel, and apparently, the ghost hates basketball.  The Chicago Bulls, Miami Heat, and the Baylor Lady Bears all suffered game losses, due to fatigue, after staying in the hotel.

I didn't see any ghosts (perhaps because I don't play basketball) but I will highly recommend the hotel's Breakfast Cobb.

While I went to Oklahoma City to specifically see The Memorial, I also wanted to see Old St. Joseph's Cathedral and to stop by the Oklahoma City Museum of Art to see the Chulily exhibit.  I was pleasantly surprised to find the American Banjo Museum off Bricktown, a museum that was the highlight of my day and worth it's own post (coming soon). Unfortunately, I ran out of time and missed the National Cowboy and Western Heritage Museum, as well as the Flaming Lips Compound. I also completely forgot to look for the parking meter, although I had a wonderful time wandering the botanical garden downtown.

I suppose I will need to plan another trip.