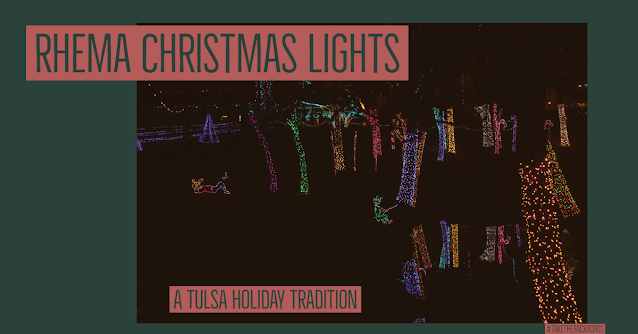 Dear Henry,
While I was growing up, one of my favorite things to do was to see Temple Square's Christmas lights in Salt Lake City, but it has been years since I've seen another place that compares with the number of lights that the Mormon church puts together.  At least until we came to Tulsa and saw the Rhema Bible Training College Christmas lights.
The Rhema Bible Training College is a Charismatic Christian school founded by Kenneth Erwin Hagin in 1974.  Kenneth Hagin had been a long time evangelical preacher, who had discovered his calling after being miraculously healed of a heart defect and blood disease while a teenager, although he would remain paralyzed throughout his life.  Inspired by Mark 11:23-24, he began preaching in the late 1930s and would eventually join the Voice of Healing Revival with other Christian ministers such as Oral Roberts and Gordon Linsey.
Mr. Hagin was further inspired to create a Christmas event to "show that Jesus is the light of the world". In 1982 he began decorating the campus with 60,000 lights and the "Rhema Christmas Light Extravaganza" was born.
The Rhema Christmas Lights have grown to over 2 million lights now and the effects are stunning, with a huge nativity and a lighted bridge, synchronized to music.  The lights cover several blocks and offer carriage rides, as well as a "motor tour".
Fish and I choose to walk through the entire campus, enjoying the Christmas spirit and the smell of hot chocolate and funnel cakes. The event runs from 5:30 to 11:30, Thanksgiving through New Years', and is incredibly popular, even on a weeknight. It's a free event, but, donations are welcome.
It will definitely become a new holiday tradition for us
xoxo a.d. elliott
Email Post
Labels: Adventures Oklahoma Road Trip
Location: 1025 W Kenosha St, Broken Arrow, OK 74012, USA