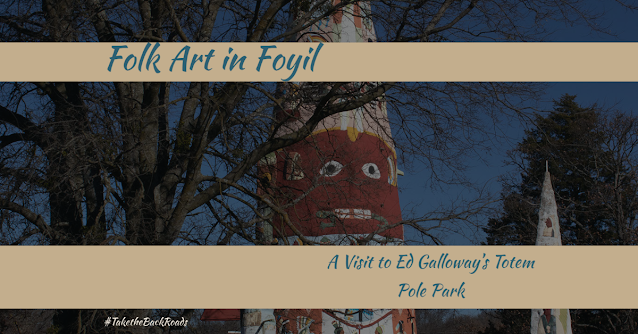 Dear Henry,
It's amazing what you can find on the side of the road.
Recently, we stopped by Ed Galloway's Totem Pole Park located in Foyil Oklahoma and it was definitely worth pulling over for.
After US Army veteran Nathan Edward Galloway (full biography here) retired from teaching in 1937, he moved to Foyil and pursued his first love, art. A self-taught sculptor, he built a workshop on his farm and began carving trinkets, wall art, and violins.  He also began building totem poles, for "something to do."
The site's central, largest, and most well-known totem pole was constructed on a large piece of sandstone that sat next to his home. He carved the stone into a turtle and built a 90-foot cement and wood tower on it.  Taking inspiration from Native American imagery, he carved nine levels of birds in bas-relief style, which he then brightly painted.  The construction of this totem pole took 11 years and the inside is painted with landscapes.
Other intricately carved and brightly painted totem poles exist on the property, although none are as large as the main one.  Also on the site are picnic tables resting on smaller totems and an 11 sided structure, designed to look like a Navaho hogan, which contains many of his wood carvings and violins.
After Mr. Galloway's death in 1962, the site fell into disrepair and was largely ignored until 1989 when it was bought by the Rogers County Historical Society and restored.
The park was listed by the National Historic Register in 1999.
Although the bulk of Ed Galloway's work exists at the park, there is another piece called "Lion in a Cage" that he had carved from a single sycamore log and is located somewhere at the Dickerson Park Zoo in Springfield Missouri.
I've got to make the trip to see it.
xoxo a.d. elliott
Adventures Oklahoma Road Trip
Location: 21300 OK-28 A, Chelsea, OK 74016, USA