A Penny For Your Walks 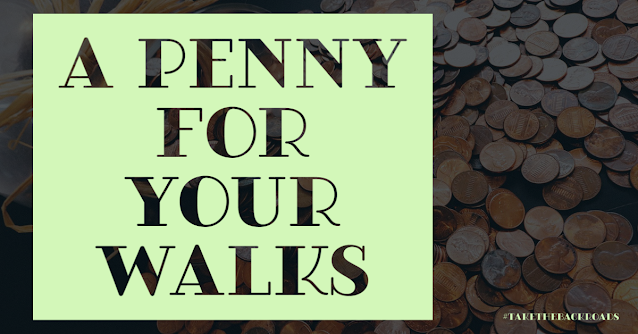 Dear Henry,
Do you have any off the wall superstitions?
One of mine is the inability to walk away from coins on the side of the road. Even if that coin is only a penny.  I am convinced that to leave the pennies where they lie is to affront the powers of the universe that puts opportunities for wealth and abundance in our path.  My children think I'm weird and I suspect that this superstition may make its way into a commitment hearing later.
Despite their mockery, since we've moved to Tulsa, it's turned into quite the lucrative side gig.
Because of the move and the restricted space in our apartment, I've spent more time walking the dog than ever before, and because we are no longer walking along isolated paths within rural Northwest Arkansas, but rather city streets, I've been picking up several coins daily. My daily haul has turned into a running joke with Fish and I'm currently earning, on average, about .05 a day.
Of course, that is just the typical day.  There has been the occasional quarter here and the occasional dollar there and ultimately, over the course of the last couple of months, I picked up enough to buy the turkey for our donated Thanksgiving basket, which seemed like a very appropriate way to spend my findings.
While I don't suspect I will ever become rich this way, it was nice to see the change collect into enough of a sum to buy something substantial. It was a good reminder about how much impact the little things can have on our lives and how small "changes" can turn into something substantial.
As a bonus, it has made walking the dog less of a chore and more of an adventure.
xoxo a.d. elliott
Email Post
Labels: Adventures Oklahoma
Location: Tulsa, OK, USA