Trekking Up Turkey Mountain - Tulsa's Sanctuary in the City 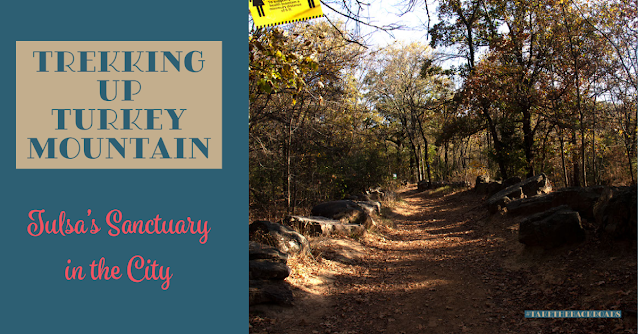 Dear Henry,
One of the great resources I have discovered here in the Tulsa area has been the Turkey Mountain Urban Wilderness.  The 300 acres of nature have done wonders to keep Ziggy and me from going crazy in the tiny apartment and during the week, the trail system is a great urban getaway.
While the development of the wilderness area didn't occur until the late 1970s, the area has long been an attraction and has been the source of several local legends.
First of all, I must say, that calling Turkey Mountain a mountain is a bit of a challenge for me.  I grew up in the Rockies and I believe that the mountains should be, at least, 5000 feet (1524 meters) above sea level, anything less is something I call a hill.  Turkey Mountain tops out at 920 feet (280 meters).  There are a couple of trails rated moderate, but I didn't struggle with them much.
One of the features of the area is the petroglyphs on what is called the "Gwyn Stone" which contains a few letters in what appears to be Viking runes.   This is one of several runestones scattered throughout Oklahoma and there have been theories about Vikings visiting Oklahoma by sailing up the Arkansas River via the Mississippi around the time of Lief Erickson's settlements in Newfoundland.  I've learned that dating this (or any stone inscription) is hard to do with any precision, but that, based upon weathering, the inscriptions could have easily been carved much later than the time of the Vikings.  Another theory about the stones is that in the late 1880s, a large number of Swedish immigrants were part of the early settlers and that these stones were carved then.  None of the stones say anything of real value, so no one knows why they were created, only that they were considered "old" a hundred years ago.
Another legend surrounding the area is one of Spanish gold.  According to the stories, Spanish Conquistadors buried their newly discovered gold, while being pursued by upset local Native American tribes, somewhere near one of the river bays at the base of the mountain.  I suspect the treasure part of the legend is completely false, primarily because there isn't any gold in Oklahoma, geologically speaking. As to Conquistador/Native American conflict? That happened all of the time.
Then there is Atwell Cave, which was discovered by W.A. Atwell during his work with the Midland Valley Railroad.  An incredibly large cave was uncovered during blasts and contained a mysterious skeleton and the inscription J.A. Cox 1864.  For some reason, this find was hotly challenged by the local papers with claims that J.A. Cox was actually a blaster for the same company and who had gone missing three years earlier.  There were also claims that the cave was not really a cave, but rather a small hole in the rock.  Unfortunately, the mystery surrounding the size of Atwell Cave, the true identity of the skeleton, and the true date he died in the cave, will remain unsolved, as a landslide sealed the entrance in 1920.
The area remained largely farmland and railroad land until 1978 when Tulsa city acquired the first 147 acres from Tulsa County and J.L. Reynolds and began to create the park and trail system.  There were several land acquisitions throughout the years, including a sizeable 80 acres donated from Stephen J. Jatras in 1996.
In its early years, the park doesn't sound like it was much fun.  Until the late 1990s, it was considered a meeting place for all things clandestine and it would take increased police patrols (activity in the park is still prohibited after dark) and large contributions from the George Kaiser Family Fund and the QuickTrip Corporation to turn the area around.  The modern facilities, including the two bronze work statues from NaturesWork, would be installed in 2009 and were largely the result of donations from the formerly mentioned corporations.
Now, the park and trail systems are beautiful and during the week a very welcome respite.  On the weekend, however, the trails are packed and it becomes difficult to imagine yourself alone in nature.
The trails are leashed dog friendly but there aren't any trash or water facilities other than the ones found out the entrance, so be prepared to pack your water in and the poo out.
xoxo a.d. elliott
Email Post
Labels: Adventures Odd Facts Oklahoma
Location: Turkey Mountain Urban Wilderness Area, Tulsa, OK 74132, USA