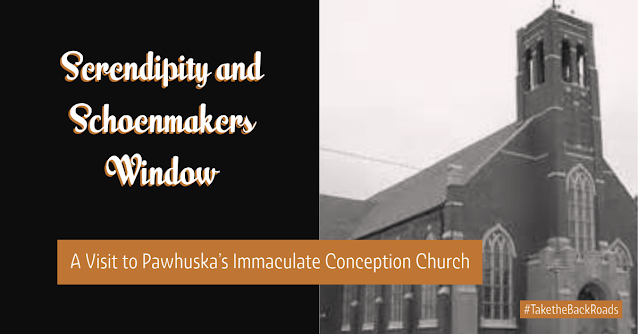 Dear Henry,
During our recent outing to Osage Hills State Park, I noticed that we were near the Osage Nation and the town of Pawhuska, where a shrine to St. Kateri Tekakwitha, the first Native American to be canonized, was located at the Immaculate Conception Church. This shrine is on my list of  "places I wanted to see" and I vaguely remember reading, somewhere, that the shrine was outside and always open. Since we were close, we decided to head over.
I should probably clarify right away - While the St. Kateri Tekakwitha shrine is outside, it is not always open and, as I stood outside, trying to peer through the window into the shrine, one of the parishioners Mr. Lynn, who just happened to be at the parish hall, asked if we wanted to see "their windows" at the church. 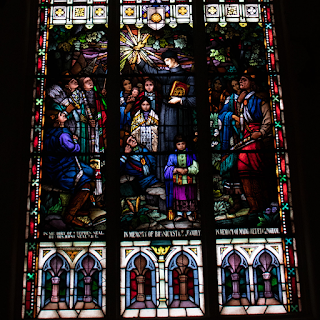 Like the Tulsa Cathedral, the windows are Munich Glass, from the Royal Bavarian Stained Glass Manufactory and while they are all stunning, it was this window in particular that Mr. Lynn wanted to show me.   The piece is known as "The Osage Window" or "Schoenmakers Window" and it represents the story of the Osage Nation, Father John Schoenmakers, and the history of this building.
Prior to 1800, the Osage Nation held the territory around what is now Southeastern Kansas and Northeastern Oklahoma, as well as lands across most of Arkansas and southern Missouri, with the  Mississipi River as their Eastern border. They were mostly a hunting/range people and traded frequently with trappers while the area was under Spanish and French control.
Initially, the Osage Nation did not have too much trouble after the Louisiana Purchase. Their land was out of the way and the initial treaties between the people and the US government talked only of a goods exchange, the building of a fort, and of establishing trade.  However, as more early American settlers began moving into the area, the conflicts began and in 1818, the Nation gave up its first lands in Arkansas and Oklahoma to early American settlers.  It was also during this period that the 1819 "Indian Civilization Act" was passed in Washington DC, which authorized the establishment of Christian missions among Native peoples.
Between 1820 and 1839 several Protestant groups attempted to establish missions in Missouri and Kansas for the Osage people, however, the Calvinist doctrine of these missionaries did not align well with the Osage belief system, and additionally, there were still a great many conflicts with American settlers.  In 1825, the Osage people relinquished their land in Missouri and left the area that most of the missions were in. 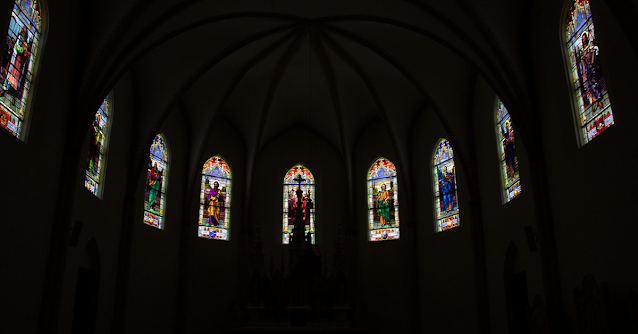 As the people concentrated in their Kansas territory, tribal leaders, realizing they would be unable to avoid mission schools, requested that their children be taught by the "black gowns" (Catholic priests), whom they had interacted with during their early French trading days and whose theology they felt better aligned with their own religious practices.
A Jesuit priest named Father Schoenmakers agreed to head a mission.
Father John Schoenmakers (1807-1883) was born in Holland and had immigrated to the US in 1833, shortly after his ordination as a secular priest. He joined the Jesuit order in 1834 and was initially housed in Florissant Missouri.
On April 28, 1847, Father Schoenmakers, Father John J Bax, and three laypersons (Brothers John de Bruyn, John Sheehan, and Thomas Coghlan) opened the St. Francis mission and boys school in what is now St Paul Kansas. Father Schoenmakers also convinced the Sisters of Loretto in Kentucky to send sisters to the mission and on October 10, 1847, Mother Concordia Hening, Sister Bridget Hayden, Sister Mary Petronilla Van Prater, and Sister Vincentia Van Coal opened a girls school at the mission.
Initially, the mission had a lot of success with the school, although most of the Osage people weren't particularly interested in the faith (they had their own).  Much would change over the years.
The mission suffered a major setback during what was either measles or smallpox in 1852.  The Osage people were in a panic,  feared for their children, and began pulling them out of the mission school (and perhaps spreading the illness throughout the area).  Their panic stemmed from a tragic event that happened at a previous mission. 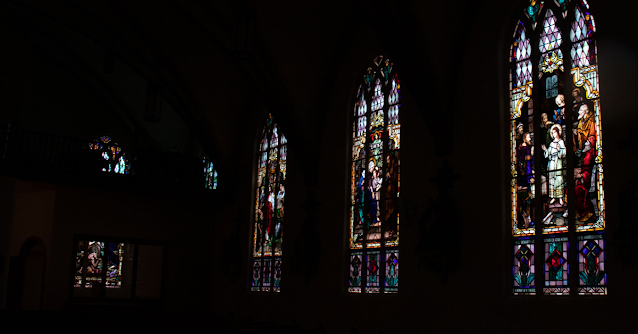 Now, Henry, I must be very clear that I don't have all of the facts about this story and I am sharing what little information I have.
At one of the Protestant mission schools that existed between 1818 and 1825 (there were several that bore the same name), there was also an epidemic of either measles or smallpox.  The mission and school appear to have been under quarantine and the children were separated from their parents for a few weeks. When the parents returned for their children, they were all dead and the Osage people believed that the children had been abandoned and uncared for.
I must reiterate, I only have the barest outline of the story and most of the records surrounding this period of time have not been digitized, so I haven't been able to gather much information via online sources.  I would like to believe that the missionaries, as Christians, had been too sick themselves to care for the children and that this was ultimately a scenario where everyone died. To think that these children could have been abandoned breaks my heart.
It was this event that triggered the Osage people to panic and to begin removing their children away from the mission during the 1852 outbreak. The missionaries of St. Francis stayed through the epidemic, although Father Shoenmakers was briefly evacuated when he fell ill.  Father Bax, in addition to helping care for the children still at the mission school, would also visit and perform sacraments at the homes of the people who had left, and ultimately, Father Bax himself would fall ill.  He died on August 5, 1852. He was 35.
The mission eventually recovered from this epidemic as well as subsequent outbreaks occurring in 1855 and 1856, although these waves of illnesses reduced the population of the Osage significantly.
During the Civil War, the people tried to stay neutral but were raided and garrisoned by troops from both sides and when the war ended in 1865, it was believed that they had too much land for the number of people and because more settlers were moving in and a treaty was drawn up.  This time, however, the people sold (not relinquished) their lands in Kansas to the US Government.  Father Schoenmakers helped the Osage nation navigate that treaty, and upon learning of the Sturges Treaty of 1868 (which would have sold land directly to railroads, for pennies), helped rally support (both within the tribe and in Washington DC) against it.  The Drum Creek Treaty ensured that the 1865 land sale remained valid and it became illegal to sell tribal lands to any other agency besides the US government.  This land sale gave the Osage people the power to buy their own land when they were moved to Oklahoma in 1870. 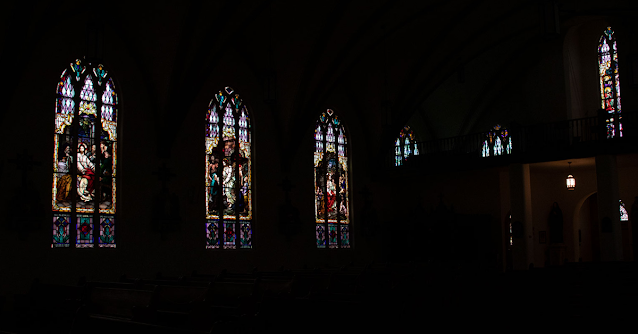 The people's move to Oklahoma was not without challenges, however.  When President Grant assumed office he instituted the "Indian Peace Policy" which established mission districts for native peoples. The Society of Friends (Quakers) was assigned the areas of Nebraska, Kansas, and all of  "Indian Territory" (Oklahoma) and it became illegal for Father Schoenmakers and the other missionaries of St. Francis to minister to the Osage people from 1870 to 1882.
I have heard that the law was enforced.  I have also heard that Father Paul Mary Ponziglione (Father Bax's replacement) broke that law, as did several other priests.
Father Schoenmakers would die on July 28, 1883, shortly after celebrating the Golden Jubilee of his ordination.
The Osage area of Oklahoma isn't suited toward the farming the US Government had intended and between 1870 and 1894 the people survived some very lean years by providing cattle rangeland and with government allotments.  Their luck would change in 1894 when oil was discovered under tribal lands.
Because of the earlier treaty work, the Osage people owned their land, outright,  and after a lengthy court battle, won the use of the mineral rights and royalties, in 1907.  One of the Nation's first big projects was to build a church.
Construction of the Immaculate Conception Church began in 1910 and was finished, without the windows in 1915.  The windows were delayed in Germany, by WWI.  The final dedication, with the windows, occurred in 1925. 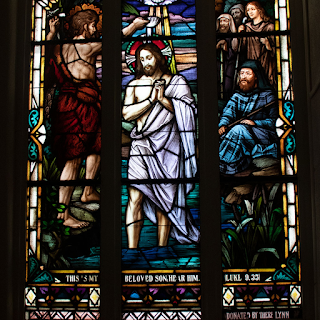 All of the windows were donated by members of the parish, using the proceeds from their royalties.  Mr. Lynn was especially proud of this window, located in the baptism room (where he, himself was baptized). The window was donated by his grandmother.
I was so very excited that I happened across Mr. Lynn at the church and was able to hear this story (serendipity!) and I want to extend my apologies to Mrs. Lynn, who ended up delaying dinner why Mr. Lynn showed me the church.
I need to return soon to see the St. Kateri shrine (this time during regular tour hours Tuesday - Friday 11am to 2pm) and for Mass (6:15pm Tuesday - Friday, Sunday's at 9am)
xoxo a.d. elliott
Email Post
Labels: Adventures Oklahoma Pilgrimage Religious Road Trip
Location: Pawhuska, OK 74056, USA