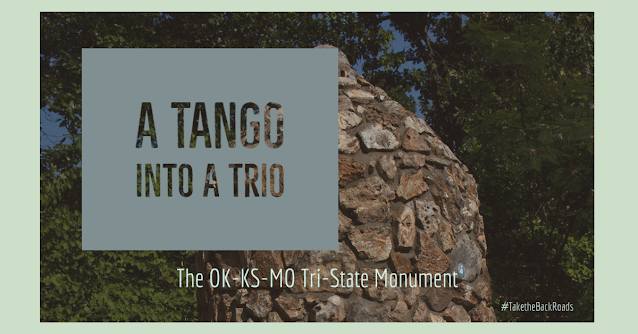 Dear Henry,
Ziggy and I took advantage of the warm fall weather and we stopped by the OK-KS-MO Tri-State Monument. There, we stretched our legs into three states and got acquainted with all of the complexities it took to establish these boundaries.
This area had been surveyed, several times, starting with the Spanish explorations and continuing through New Frances explorations. After the Louisiana Purchase and its acquisition by the new American government, it would be surveyed several times again.  This process would continue throughout the Civil War, until 1907, when Oklahoma finally became a state.  There are several reasons for this.
The boundaries of Missouri was established early, the state was founded in 1821 and the state had long been used as a "dividing line".   Kansas and Oklahoma took longer to establish and the borders were quite fluid. Kansas was a "Free" territory and, like Oklahoma (which wasn't a free territory), contained native people's land. The state of Kansas was created in 1861. It would take almost 50 years before the Oklahoma border was established.
Oklahoma, the territory, was established around 1835 and was "Indian Territory".  The name "Oklahoma" stems from the Choctaw "Okla Humma" which means "The Red People". During the mid- 1800s, there were quite a few boundary changes, both internally between the individual Nations forced to settle there, and externally, between the Nations (who had formed a loose assembly between them)  and the US government. Finally, after the Civil War, there were quite a bit of Native land that was ceded to the US government because of the Native Nation's support of the Confederacy.
The 1887 and 1889 land rushes and the Curtis Act are what finally established the current boundary of Oklahoma that exists today.
However, no one really paid much attention to where the border was until 1938 (I suspect they still don't).  During the Great Depression and the height of the Civilian Conservation Program, when many of the park and infrastructure projects were created, the National Youth Administration, an offshoot of the CCC designed to provide jobs for young adults, took on the project of marking the OK-KS-MO border with an impressive stone cairn.
The cairn is fifty feet away from the real border and I don't know why, the cairn has a plaque that notes the discrepancy, so it wasn't due to an error, it is just not on the "actual" borders.  In 2004, the Missouri County Surveyors association decided to mark the actual border with another plaque.
It is a dog-friendly site but please, be a good dog owner and clean up the poo.
It is also is right next to the Quapaw Nation's Downstream Casino and Resorts, which often had (pre-COVID) tons of live shows and a great spa.  It is currently open, but, as I am currently exploring with the dog, I didn't get a chance to stop by the spa and see.
Maybe next time.
xoxo a.d. elliott
Email Post
Labels: Adventures Kansas Missouri Oklahoma