Stopping by St. Wenceslaus - A Visit to the National Shrine of the Infant Jesus of Prague 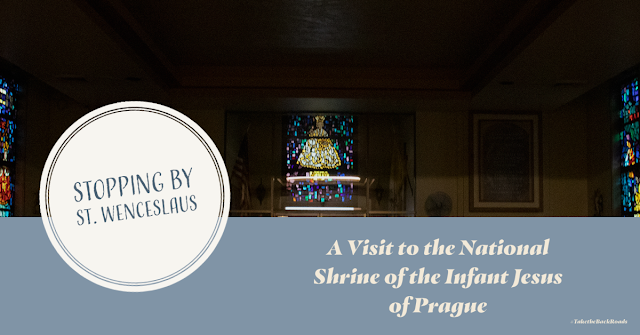 Dear Henry,
We are still working on our move to Tulsa and, despite my insistence upon living simply, I am flabbergasted by the amount of "stuff" that has needed to be packed.  Recently though, I decided to take a day off from the move and headed to Prague Oklahoma to check out the National Shrine of the Infant Jesus of Prague at St. Wenceslaus.
While images of and devotions to the infant Jesus have existed almost as long as Christianity itself, the statue of the Infant Jesus of Prague was created only a mere 500 years ago.   The legend is that a Spanish friar, inspired by an image in a dream, created the wood and wax sculpture of the infant Jesus, with one hand holding a cross-bearing orb (the globus cruciger) and the other hand raised in a gesture of peace. The statue is generally displayed dressed in royal finery, but the unadorned statue of the Infant Jesus is robed only wearing a simple gown.  The statue also, according to legend, once belonged to St. Teresa of Avila and it was her who gifted the statue to Dona Isabel Briceno Arevalo, who would, in turn, presented the statue to her daughter María Maximiliana Manriquez de Lara y Mendoza at her wedding to Vratislav of Pernstyn, who was a part of Czech nobility.  Maria passed the statue to her daughter the Princess Polyxena of Lobkowitz, who, in 1629, gifted the statue to the Church of Our Lady of Victories and the Carmelite Monastery attached. The monks would begin to start regular devotions to the Infant Jesus, but when King Gustavus Aldophus of Sweeden took control of Prague in 1631, the monastery was evacuated and plundered. The statue was tossed on a pile of stuff behind the altar and the devotions forgotten. 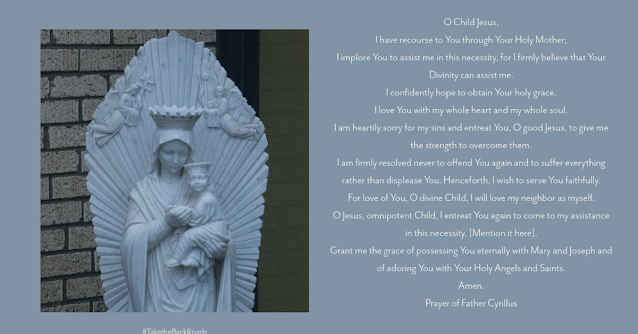 In 1637, one of the monks, Father Cyrillus, was finally able to return to the monastery and he found the statue amid the rubble with its hands broken off.   He was inspired by a dream to restore the statue and to restore the monastery's devotions to the Infant Jesus. The restored statue is currently on display at the Church of Our Lady of Victories and the devotions have continued in the city of Prague and throughout the Carmelite order ever since.
The devotion to the Infant Jesus of Prague came to Oklahoma after a portion of the Sac and Fox Reservation land was opened to non-native settlers and a small group of Czech immigrants purchased the land in 1891. The first St. Wenceslaus was a small wooden church about a mile away from the current church.  It was replaced by a new church in 1909, which was destroyed by a tornado in 1919 and a brick church was built in its place.  That St. Wenceslaus would serve the community until the late 1940s when the sleepy town of Prague outgrew it and fundraising began for a new church.
However, finances did not appear to work in the parish's favor and it didn't look as if the town would ever get a new church. At least, it didn't look possible until the arrival of a replica of the Infant of Prague.
Early in 1947, while the pastor Father George V Johnson was visiting his critically ill mother in California, a Carmelite sister suggested he and the rest of the parish began devotions to the Infant Jesus and offered a statue (one of the replicas created every four years) of the Infant of Prague.  The statue would arrive in August 1947 and within a couple of years, the funds for a new (the current) St. Wenceslaus were raised.
The new St. Wenceslaus was dedicated by Bishop Eugene J. McGuinness on February 22, 1949, with the Statue of the Infant of Prague behind the main altar and on August 2, 1949, Father Johnson was able to establish, with blessings from the Vatican, the National Shrine to the Infant Jesus of Prague. 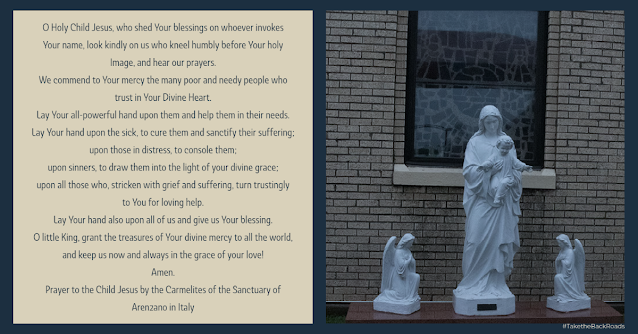 I've had the Shrine on my "to do" list for a while now and I had a free morning in Tulsa during the moving preparations so I decided to drive to the shrine in thanksgiving for prayers answered.  I loved the shrine and the gardens (which, from what I understand, are cared for by the current pastor Father Long Phan) and I was really drawn to the church's stained glass, which appeared to use a mosaic technique and grout, rather than the traditional leaded seams of stained glass.  I was also fortunate enough to attend a mass at the shrine.
Normally, mass is offered at 9am, but because a group had come in from San Antonio, Father Long Phan was offering another mass and I managed to secure a seat in the back. It was an unexpected surprise and I hope the group's pilgrimage intentions were fulfilled.
After mass, I stopped by the gift shop and grabbed a handful of little Infant of Prague figures to bring home to everyone.  They were a big hit (I wish I bought more) and I was surprised how many people had never heard of the Shrine, even though it is a short day trip from Northwest Arkansas.
I'm hoping to get the word out because it was certainly a great place to visit.
xoxo a.d. elliott