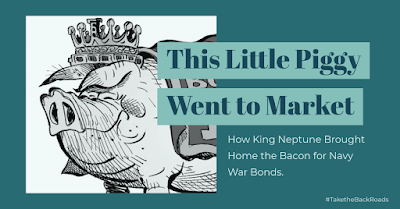 Have you ever wondered how many times you can auction a pig?

A lot, if the pig is King Neptune.

King Neptune was a Hereford swine born May 16, 1942, on the farm of Sherman Boner, in West Frankfort Illinois.  Patty Boner, Sherman Boner's daughter, raised the pig as a 4H project.

In December 1942, at the end of the project, King Neptune was donated as the main course of a pig roast.

The US Navy was raising funds for the battleship USS Illinois and Chief Petty Officer Lingle, sensing a fundraising opportunity, took King Neptune on the road, dressed up in a crown and royal cape and began auctioning parts of the pig off at various Elks clubs throughout Illinois.

The whole adventure sounds like something that would take place in Blandings Castle (from P.G. Wodehouse "Pig's Have Wings").

It should be mentioned that the pieces of the pig being auctioned were never separated from the pig and were always donated back to the pig to be auctioned again and once, the then-governor of Illinois, Dwight H. Green, purchased King Neptune, in his entirety, for $1 Million, on behalf of the State.

Chief Petty Officer Lingle and King Neptune would raise a staggering $19 Million in war bonds, although the USS Illinois itself was never completed.

In 1946, King Neptune again faced the slaughterhouse. Chief Petty Officer Lingle intervened once again and found a home for the pig on the farm of Ernest Goddard.  King Neptune died of pneumonia on May 14, 1950, and was buried with full military honors.

I am very glad no one ate the pig.