In Memory of John Jacobs - A Tale of Many 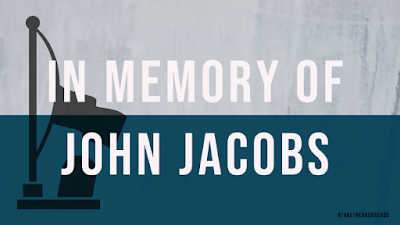 The other day I read about the WWII Japanese prisoner transport ship the Enoura Maru.

On January 9, 1945, the Enoura Maru was docked at Takao in Formosa and was overfilled with Allied prisoners. The ship was attacked by a raid of mostly American aircraft.  As many as 400 prisoners died during the attack and the days that followed. The survivors were transferred to the ship Brazil Maru and sent to Moji Japan.  Over 500 additional Allied prisoners died on that leg of the journey.

The account I read had an eyewitness testimony of the experience from USAF servicemember John Jacobs.

While John Jacobs is a fairly common name, I can generally puzzle together enough information to piece together enough for an entry in the www.everydaypatriot.com blog.  Such would not be the case here.

For example, there was *this* John Jacobs, a member of the US  Air Force and who came from Cambria California and was captured in Manilla.  But there was also John Jacobs, a technical sergeant in the US Army, who also came from California and was killed in 1946. Or perhaps John Jacobs from Niagra Falls New York who enlisted in the US Army in 1943. Or there were the two US Navy John Jacobs' that I found, one aboard the USS Henderson and the other aboard the USS Hull. Or maybe the one from Colorado, or Pennsylvania.

The number of records was staggering and I am saddened and horrified by the deluge of men named John Jacob whose lives were changed forever by WWII.

I want to honor them all.