There Once Was A Hyena Named Bill - Tales of Presidential Pets 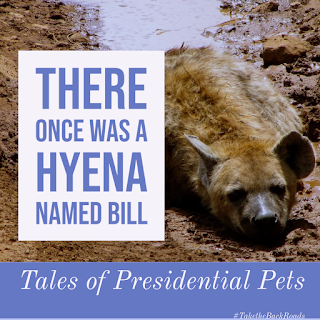 We both know that President Theodore Roosevelt was quite the character, but I really think he stands out as a presidential pet owner.  During his presidency, the White House was a zoo, and briefly, was the home of a hyena named Bill.

Bill was a gift from Ethiopia's Emperor Menelik II in 1904, and despite President Roosevelt's dislike of hyenas (he thought they were cowardly) he did eventually grow to love the hyena, feeding it table scraps and teaching it tricks.  The hyena, though, grew too large for the White House and was moved to the National Zoo.

Other unusual pets owned by the Roosevelt's include a chicken named Baron Speckle, Bill the lizard (to distinguish from Bill the hyena), a garter snake named Emily Spinach, and finally, Josiah, the badger.  Jonathan Edwards, a bear, was also a brief member of the family before he also became too large for the White House and was moved to the National Zoo.

President Roosevelt wasn't the only president who maintained a plethora of unusual pets. President Calvin Coolridge had Rebecca the raccoon, Enoch the goose, William Johnson Hippopotamus, Smoky the bobcat, and Tax Reduction and Budget Bureau, a pair of lion cubs.  Mrs. President Coolridge removed a couple of bear cubs and a few wallabies to the National Zoo before Mr. President could name them.

Other fun and unusual presidential pets include President Lincoln's goats Nany and Nanko and his turkey, Jack. President Benjamin Harrison's goat Whiskers, and two opossums Mr. Recprocity and Mr. Protection.  Molly Wooly and Pauline Wayne were President Taft's presidential cows and finally, Woodrow Wilson had a flock of 48 sheep, which he used to mow the White House lawn.

One tends to think of the White House as the crown of American culture and refinement (we can thank our beloved first lady Jackie O for this image) but really, it appears that the White House has often been nothing more than a barn.