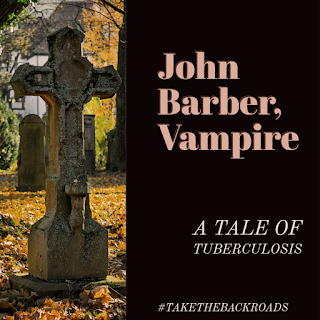 Did you know there were vampires in New England?

In 1990, a coffin was discovered at a gravel quarry in Griswold, Connecticut, with the initials JB and the number 55 hammered into the coffin lid with brass tacks.

The bones within the coffin were arranged, several years postmortem, into a Jolly Roger.

Intrigued by this arrangement, local archeologists started "digging" (couldn't help it) into the mystery, and though historical records and DNA testing, they were able to put together his story.

JB was a man named John Barber and he had tuberculosis and oddly enough, what happened to John Barber's body wasn't all that rare.

Tuberculosis was a real problem during that period of time and was called consumption because of the wasting and draining effects of the disease.  The disease was (and still is) incredibly contagious, and because of the disease's symptoms  (paleness, blood at the corners of the mouth, a decaying smell to the breath), there was a belief, particularly in the rural areas of New England, that deceased members of the family were returning from the grave to "consume" other family members.

To protect themselves and to cure any sick family members, corpses would be dug up (often by their own families), the internal organs burned (with the ashes used in medicinal teas), and then reinterred after being rearranged to prevent the corpses from rising again.

The most famous of the New England vampires was Mercy Brown.  Two months after her death, her body was exhumed, her heart burned and mixed with water and given to her brother to drink.

He would die two months later from tuberculosis.

I realized, after reading about this, how fortunate I am to have been born in the age of antibiotics, clean water, and modern scientific theory.  This whole process just sounds icky.