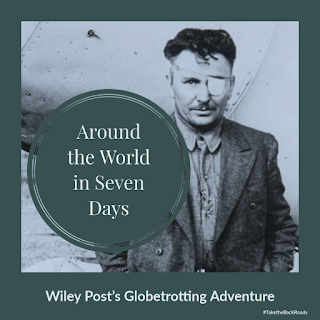 Do you know who the first person who flew around the world was?

Did you think it was Charles Lindbergh? Yeah, me too.

Charles Lindbergh was such a larger than life character that it is easy to attribute all acts of early aviation to him.  But this honor isn't his.

The first aviator to circle the world was actually Wiley Post, he completed the journey in 7 days 18 hours and 49 minutes, landing in New York on July 22, 1933.

Wiley Post, like Charles Lindbergh, was himself a larger than life character.  He was born in 1898 to cotton farming parents and he initially tried to enter the aviation program during WWI but the war ending before his training was complete.  He then, briefly, drifted through the professions of roughnecking and bank robbery (for which he served a year in the Oklahoma State Prison systems).

When an oil rigging accident caused the loss of his left eye, he used the settlement money to buy an airplane. Ultimately, Wiley Post caught his big, professional, break, by becoming the personal pilot for the Oklahoma oil Barrons Powell Briscoe and F.C. Hall.  It was the oilmen who purchased the famous "Winnie Mae", the single-engine Lockheed Martin Vega, which made the trip around the world.

Wiley Post also contributed much to the early developments in high altitude flight and the development of pressurized flight suits.  It was unfortunate that his career was cut short by his death in 1935, during an attempt, with Will Rogers, to fly over the arctic to Russia.

I wondered when I saw Wiley Post's name if this man was the character that Wile E. Coyote was based upon.  But no, it turns out the cartoon character is based upon the Coyote, from Mark Twain's book Roughing It.