Wren in a Basket - an Observation 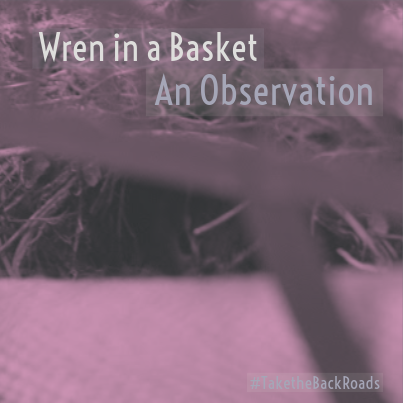 I have a family of wrens living in one of my strawberry planters.

Several months ago, the wrens had moved into an old barbecue grill that we had on the deck. We bought a new one last fall but we hadn't considered moving the old one until this spring,  we discovered we had waited too long.

Fish found the nest during the spring cleaning and pressure washing of the deck, and although we decided to leave the grill where it was until the babies had left the nest, the event proved to be too much for the birds and Fish and I received our first ever wren lesson.

Wrens can move their babies.

I discovered this a couple of days later when I noticed a bird's nest in my empty strawberry planters and I recognized the birds from the barbecue grill.

I don't know how they managed it (or maybe they didn't and we really have two sets of birds, I'm not sure).

Their new nest is in the strawberry planter directly in front of my "morning coffee and paper on the porch" chair and over the last couple of months, they have finally gotten to where they trust me enough to enter and exit their nest in my presence.

It has been an interesting study in wren behavior and I had no idea, until now, that I was this interested in bird watching. (Birds bigger than chickens kind of scare me.  They have creepy feet).

So far, this is what I have observed:

A wren father is an active participant in the parenting process.

Wrens talk to their babies in clinking sounds and it is completely different than the wren bird call - I wouldn't have thought it was the same bird.

Wrens feed their chicks grubs and big carpenter ants, they also bring back vegetables in the form of neatly trimmed grass stalk bases.

Wrens are quite scary when someone gets too close to their nest.

Unfortunately, it has become another year that I don't manage to grow any strawberries - I am wondering if I should just quit trying.