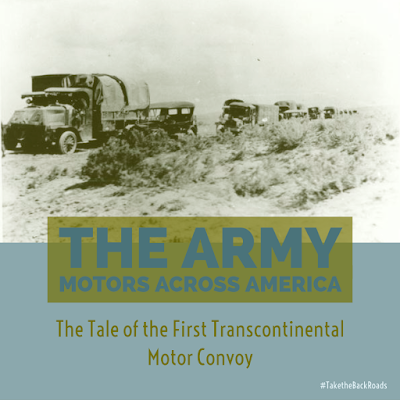 I think I have mentioned that I want to do a "Great American Road-Trip" before, and still, despite the logistical challenges, plan to take one.

While I was thinking about (pre-planning?) my road trip, I wondered where the idea of a cross American road trip originally came from.

It turns out, one of the first American road trips was done in 1919 by the U.S. Army.

It began as a post-WWI project for the military - imagine if you will, a bunch of soldiers, fresh from Europe, and with nothing to do.  Conquering the roads of America was the perfect project.

The operation, the First Transcontinental Motor Convoy was a convoy of about 100 vehicles (including a tank!) that left the White House on July 7, 1919, and headed toward the Presidio, in San Fransico California.

The convoy made it to the outskirts of D.C. before suffering the first of its many mechanical issues.

On a lark, a young Lieutenant Colonel named Dwight D. Eisenhower decided to join the convoy in Maryland.

The convoy averaged a pace of six miles an hour and arrived in San Francisco on September 6, 1919, after causing 230 road accidents and the destruction of 88 bridges.

Oddly enough, one of the things that President Dwight D. Eisenhower became known for was his creation of the Interstate Highway System.  I wonder where he got the idea.