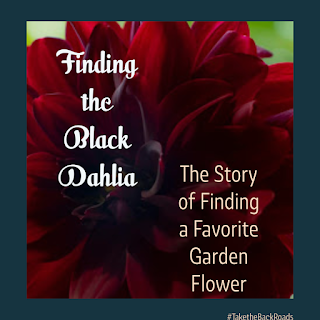 Last Spring, in a sale bin, I found three tubers in a baggie with "Dahlias - 3.00" written on it in magic marker.

I figured why not?

They were all different, one of the tubers grew to a purple one with stripes, one was a fluffy yellow, and one was a black.

All three were beautiful but I particularly loved the black, however last Fall, after pulling the tubers for the Winter, I noticed one of them had mildewed.

I thought it was the black dahlia and I was very sad.

After what has been a particularly wet Spring and early Summer, the dahlias are finally blooming and to my surprise, there was my black.  It was my fluffy yellow one that mildewed.

(*Side note - I feel like I am maligning the yellow dahlia or implying that it wasn't a worthy flower.  Not at all, it was lovely and I wish I could have gotten a picture that did it justice.  I seem to struggle with photographing that color of yellow.)

Once, years ago, there was a woman in the neighborhood who grew dahlias.  She had tubers that were ancient and produced the huge dinner plate sized blossoms.  She had hundreds of these and she allowed me open access to her garden (because I never picked her flowers).  I always felt like I was walking through a land created by Dr. Seuss when I was there.

My dahlias still have a long way to go before they get to look like that, but, one day, I hope to duplicate the effect.