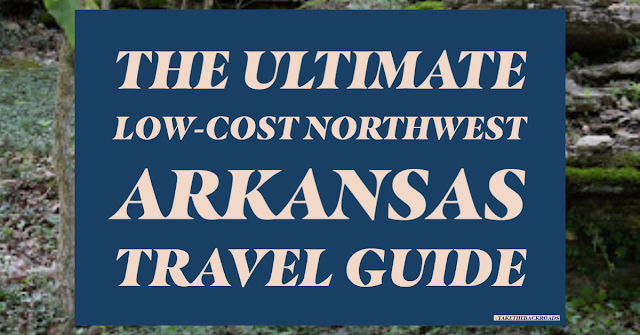 My cousins are safely back home and it has been such a fun adventure. I mean, how often do you get to explore your hometown like a tourist?

I am grateful they came to visit and trusted me enough to allow me to plan a trip for them. I would like to call the trip a success as they seemed to have a good time (I hope they weren't lying).


So here it is, a Take the Back Roads Ultimate Northwest Arkansas Destination Guide*
*(according to me)

Eureka Springs Arkansas is a quaint town nestled in the Ozarks. It became most known, during the early 1900s, as a mountainous spa and resort town.  Many of the oldest buildings have been maintained and the entire area is on the National Register of Historic Places.

Our first stop on our tour of  Eureka Springs was the Thorncrown Chapel. The chapel was commissioned in the 1980s by Jim Reed as a pilgrimage chapel. It was designed by E. Fay Jones. The design gives an open-air feel to the structure and it allows you to feel as if you are part of the surrounding forest.  The church is nestled back into the woods and the entire area radiates tranquility.  We really enjoyed our time of quiet contemplation here. 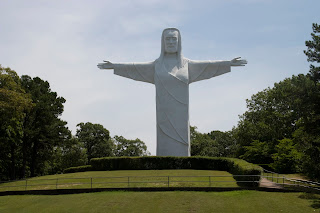 Our next stop in Eureka Springs was the Christ of the Ozarks statue. The statue, erected in 1966, was commissioned by Gerald L.K. Smith as a Sacred Project.

The statue is on the campus of a larger park, containing what appeared to be a recreated biblical city (we didn't explore that part of the park) and during the evenings, the amphitheater on the site hosts "The Great Passion Play. They also have a segment of the Berlin wall on display.

It is a Christian themed area and may not be for everyone. 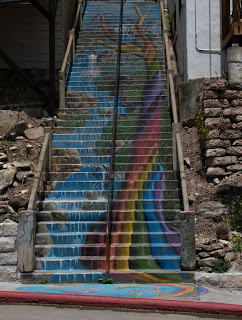 Afterward, we heading downtown for some shopping and lunch.

There are musicians and the occasional artist to be found along the streets and there are even a few of the spas left.

I did mention steep right?

The town is built into the hills, the sidewalks are cobbled and everything is quite narrow.

Watching your footing is part of the charm of the town. 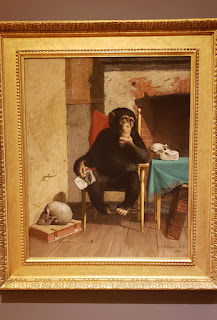 Our first stop of the day was the Crystal Bridges Museum of American Art.  This museum opened in 2011 and was/still is largely funded by the Walton Family Foundation.

The Crystal Bridges Art Museum is surprising. Bentonville Arkansas is a small city and only has a population of about 50 thousand.  Yet, this museum is impressive and on par with the museums in the large metro areas.  The Crystal Bridges museum houses a permanent collection worth more than $480 million and includes the Peale portrait of George Washington, as well as several Warhols, O'keefes, Audubon,  etc, etc.  It is a beautiful place.  It is one of my favorite places.

It is also not for everyone. We lost the guys somewhere after the first room, they disappeared into the museum's cafe.

After Crystal Bridges, we decided to see how the Walton family got it all started and in downtown Bentonville, there is a small museum in the original Walmart Five and Dime. This museum provides a history of the Walton brothers and the creation of the Walmart corporation.  It is an interesting lesson in the history of American's largest corporation.

There is a gift shop with some old-timey Walmart memorabilia, as well as an ice cream counter for a quick snack.

Next door, in the neighboring town of Rogers Arkansas, is another small museum, the Daisy BB gun museum, that is a lot of fun, especially if you liked your BB gun and especially if you are (or knows someone who is) a fan of the movie "A Christmas Story".

I was shocked to see how many different types of BB guns there were and I was also shocked to see the number of inappropriate toys.  For example, in the 1930s, you could get an indoor target range for your Daisy BB gun.  There were even advertisements of mom demonstrating how target shooting was done.

You can purchase both memorabilia and air guns from this location and they will help you ship them home. 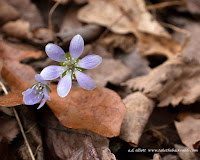 On the third day, we rested.   It rained quite a bit that day and as it was Sunday, there was some running around in the morning and early afternoon.

Later in the day, we tried an escape room at The Experience.  It was humbling.  We all learned that we are not nearly as smart as we thought we were.  We also learned that our problem-solving skills need some work.

We did, however, manage to get out of our handcuffs in the Jesse James Room.

Day Four: A Day on the Lake 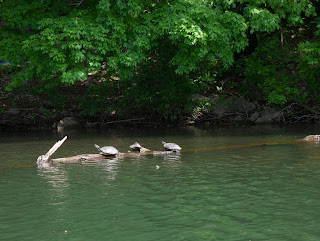 Today was spent relaxing on the lake.

Northwest Arkansas is a treasure when it comes to outdoor recreation and there are many companies that cater to this.

In addition to boat rentals, many of the larger waterways also have canoe trips or tube rentals.

A day boating and swimming in the lake was the perfect thing to round out the vacation.

On the last day, we explored the area's land features.

The Ozarks have a lot of natural limestone formations and a lot of water.  This gives the area many waterfalls and caves.  The area also used to be an inland sea and many of the cave and bluff walls contain fossils and other deposits you can easily see.

Our first stop of the day, the Bluff Dwellers Cave, isn't actually in Arkansas but is nearby in Noel, Missouri.

Discovered in the 1920s, the cave held artifacts from the area's early Native American population. By early, I mean early,  the artifacts date back to the "bluff dweller" civilization, which was about 8500 bc. Many of the caves artifacts were preserved because a landslide had sealed the cave shut 20,000 or so years ago, protecting the cave and the artifacts until the cave was excavated in 1925.  The cave has some incredibly cool features, including a natural dam and a mirror-like pool within it.  It takes about an hour to go through the cave. 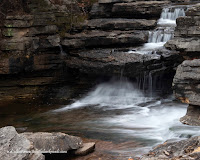 After lunch, we explored the waterfalls of Bella Vista Arkansas.

The waterfalls in the area are largely manufactured and are the spillways for the various lakes in the area.  There has been quite a bit of rain in the area this year and the area lakes are pretty full.  A lot of water was being released from the lakes and the waterfalls were running nicely for the tour.

Lake Ann's waterfall is an easy jaunt right next to the road and there are many rock formations that invite climbing over and around.

Especially when it is hot outside. 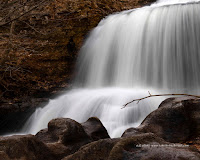 Tanyard Creek Falls is a little bit of a hike.  It is set back along the nature trail and is the spillway for Lake Windsor.  It is also a popular spot for engagement/wedding/anniversary photographs and there was a shoot going on while we were there.  I hope we weren't too distracting.

While we were there, a blue heron was fishing.  They are such graceful and stately birds and I think we spent as much time watching the bird as we did the waterfall.

At the end of the day, we had to take them to the airport for the flight home.

All in all, it was a perfect vacation, with our days spent exploring, and our evenings were spent watching fireflies and playing games of Slide 5 and Uno.

The only bummer to the vacation was that the blackberries were not ripe yet.