Peering Into Plantation Life - A Visit to Oak Alley Plantation 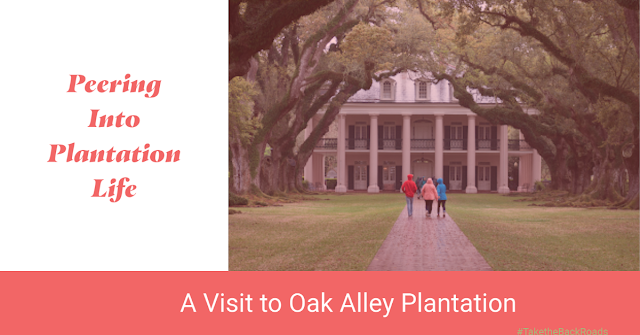 Dear Henry,
We took a tour of the Oak Alley Plantation, located in Vacherie Louisiana.  It was quite the experience.
The Oak Alley Plantation was originally named "Bon Séjour" and owned by Jacques Télesphore Roman. It would be a sugar cane producer through most of its history.  After exchanging another plantation for this piece of land from his brother-in-law Valcour Aime in 1836, Roman began constructing the house in 1837, using enslaved labor.  The house was completed in 1839.
Jacques Roman died in 1848 and his heirs struggled to maintain the plantation following his death and the plantation was heavily in debt.  The economic toll of the Civil war ended it's viability, subsequent heirs were unable to maintain it and the building fell vacant and into disrepair.
In 1925, Andrew Stewart bought the plantation as a gift to his wife Josephine, who had the house restored and modernized.  The pair operated the plantation as a cattle ranch until the 1960s when sugar cane was reintroduced (without the enslaved labor).  They were the last people to live in the house and when Josephine died in 1972, the ownership of the house passed to the Oak Alley Foundation, and the house and grounds were opened for tours since that time.
The tour is definitely worth taking. The guides go into the history of the house and ran through what it would have been like to live in the house, both as a master and as a slave - our tour guide gave a pretty unvarnished history.  The house and grounds are beautiful, but, you can't help but see the slave quarters.
This period of history is so jarring to me.  It has the facade of English or French Aristocracy, but, wow, underneath that crinoline skirt is something rather ugly.  I don't understand how anyone thought it was acceptable to "own" another person.
It's a period of history I need to learn more about.
xoxo a.d.