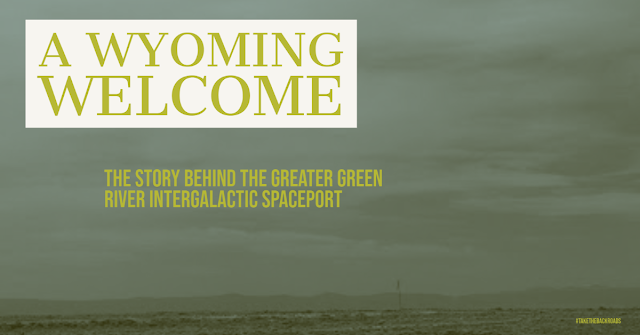 You won't believe it but, there is an Intergalactic Spaceport in Green River Wyoming.

I heard about it once and went on a mission to discover it while driving home to Colorado after a wedding in Utah and descended on the small city to find it.
Back in 1994, when Comet Shoemaker-Levy9 was raining debris all over Jupiter, the city council of Green River got together and voted to allow any displaced Jupiterites a home in Green River and the use of their small airport.
The airport in question is a 5,000 ft strip of dirt and a windsock off Hwy 530.
While I suspect that the initial vote was tongue in cheek and largely a marketing ploy to get people traveling along I80 to stop by the city, there was surprising opposition to this gesture, with many residents objecting because there was a housing shortage in the city and already a problem with illegal immigration.
It is seriously worth the trip to see though, if for no other reason than a chuckle - beware though, there is a rapid change of the speed limit on Hwy 503 as it enters city limits. I got off with a warning, you may not.
xoxo a.d.
Email Post
Labels: Adventures Road Trip Wyoming
Location: Greater Green River Intergalactic Spaceport, Airport Road, Green River, WY 82935, USA