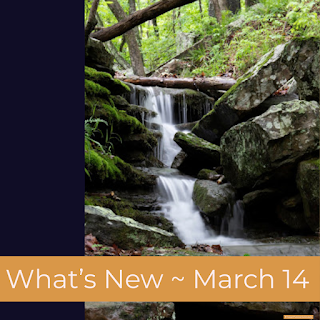 The days getting longer and the sunlight is getting stronger and I am excited to re-start cyanotypes. So excited, in fact, I wrote a short essay about the art form called A Good Case For the Blues.

In this week's All My Flowers, I relate how difficult it has been to garden and maintain landscaping on a steep hill. Run-off and soil erosion have been a challenge.

This week was also warm enough to sit on the porch and read, one of my most favorite things to do. I was able to get in quite a bit of reading.

The protagonists in the first two books of the week, Winter Loon by Susan Bernhard and The Book of Ruth by Jane Hamilton suffered from tragic childhoods and selfish parents.  Both books reminded me of how many children there are in the world who are at-risk.

I moved on to a more pleasant subject with the book A Morbid Taste for Bones by Ellis Peters.  This book is a murder mystery involving a band of monks. It is the first of a series and one I could get into.

Finally, there was The Firebrand by Marion Zimmer Bradley. The book is a retelling of the Trojan War, from the perspective of a woman.

This week, I was able to complete two biographies for www.everydaypatriot.com. The first biography was on US Marine Colonel Gregory "Pappy" Boyington. He became a fairly well-known marine, after the television show "The Black Sheep Squadron" aired in 1976.  The second biography was on, US Marine Colonel Ruth Cheney Streeter.  She was a woman determined to help and at the beginning of WWII, she enlisted and in her late 40s, and becoming the first director of the US Marine Corps Women's Reserve.

Next week looks to be a rainy one and one that I hope gets the waterfalls in the area running and the morels growing.