Little Fires in the Forest 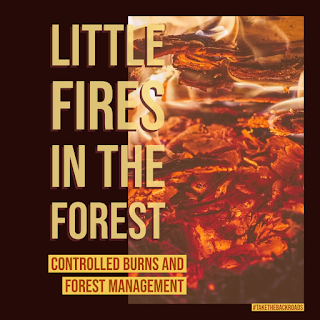 This week I have been following the words of Albert Camus "It is better to burn than to disappear." Because if I didn't burn, we would disappear.

I grew up in Northern Utah, where ground burning was verboten and so I didn't understand its value until I moved to Colorado and saw the devastation the pine beetle caused.

Still, I had no idea how important it was until I moved to NW Arkansas.

There are so many fallen leaves and so much other forest dander here that it will choke the life out of the forest floor.

A while ago I read in Guns, Germs, and Steel about how the Native American tribes actively managing the forests of North America with yearly ground burning to aid in food production. I have also read that many of the native plant and mushroom species require fire as a catalyst for growth and productivity.

More recently, I've read that the Aboriginal people of Australia used to do so as well, as did the indigenous tribes of the Amazon.

It appears that as the population of local tribes decreases this service of forest management is neglected, and it appears our forests aren't nearly as healthy as they used to be. Not only does the accumulation of ground cover, leaves, and dead wood can become a source of fuel for the major forest fires, it also, due to its slow decomposition, decrease the amount of carbon that a forest can take up.

In fact, the Amazon, due to deforestation and increased ground debris, is expected to become a carbon producer in the middle of the century.

Plus bugs.  Forest dander increases bugs, not all of them good and helpful ones.

After all of this research, I have begun making sure that my small section of the forest is actively managed, with controlled burns and ash distribution.  I have noticed an increase in wildflowers.

I have also noticed that it is a very relaxing and meditative process.

It is so easy to get wrapped up in the overwhelming worldwide climate change problems, but really, I think if we start focusing on cleaning up and actively managing our individual bits of nature, the big problems in climate change will begin to take care of themselves.