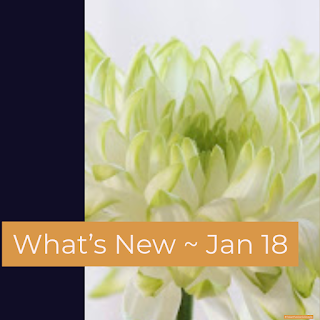 This week I had to say good-bye to my beloved Subaru, which, after 10 years and 199,997 miles, had its transmission fail. I'm rather sad about it.  Fish and I will be car shopping today.

The carless situation has allowed me to focus on one of my New Year's goals - Spend More Time Editing - and so, I was able to get several new 16 X 20 canvas wrapped prints, including "The Forgotten Fall", up at the shop.

I think the "Gerbera Back 2019" turned out especially well.

I also got a little personal this week, revealing the details of an auto-pedestrian accident I experienced so many years ago.

There was some interesting military research this week, beginning with Warrant Officer John K. "Jack" Morgan, a helicopter pilot who was killed during Desert Storm.

Out of the WWII military roles, I discovered Staff Sergeant Frank Rosynek, who was stationed in the Pacific during the War as well as Major Katherine Tolen Harris, a flight nurse who evacuated wounded soldiers during WWII and the Korean War.

Finally, I stumbled upon an old sailor from the old era, Rear Admiral Bowman McCalla, who, in addition to fighting in the Spanish-American War and the Boxer Rebellion, was also court-martialed and suspended for three years.

There have also been books! Aren't there always?  I started with Grandma Gatewood's Walk,  which is an amazing tale of the first woman to walk the Appalachian trail, before moving to Three Daughters, the intergenerational saga of three Palestinian women.  The next book, Elizabeth Street, brought me back from the Middle East and into historical New York and the trials that Italian immigrants faced after moving to the New World before I returned to the Middle East with The Reluctant Fundamentalist, which is a fictionalized account of disenchantment.

All in all, it has been a very productive couple of days...I wonder if I will be so productive once I get a car again.