Rabbit! Rabbit! What the Hare? 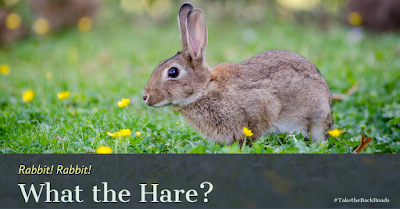 As January comes to a close (and in preparation for February 1st), someone asked if I knew the story behind saying "Rabbit Rabbit" at the beginning of every month.  I only had the vaguest idea of the tradition but I love a good rabbit hole (bwahaha, I couldn't help it) and decided that this was a bit of folklore worth investigating.

Like many good stories, it has to do with witches, and saying "Rabbit Rabbit" is only a small part of it.

Back in the day (around the Middle Ages, near as I can tell) to ward off witches, the people of England would greet each other at the first of the month with a pinch and a punch, while shouting "pinch, punch, first of the month", to drive the witches out of everyone you encountered that morning. Technically, the pinch is supposed to be a pinch of salt but because people are people, we all know that this became a painful way to start each month.

The term "rabbit rabbit" didn't begin until 1909, when the author of Notes and Queries wrote that his daughters said "rabbit rabbit" on the first day of the month, up the chimney, so that they would get a present at the end of the month, which to me sounds like a mish-mash of two little girls confusing a folk-legend, with Santa Claus and the Easter Bunny. It is very weird that it was that term that stuck.

Still, I kept following the white rabbit (I can't help it) I begin to wonder, why have rabbits been considered good luck anyway because white rabbits are a death omen, and seeing a black rabbit is unlucky.  It is also unlucky to see a rabbit on your way to work and having dreams about rabbits means something bad is about to occur. It is also a bad omen if a rabbit crosses behind you. If you are pregnant and a rabbit crosses your path, you risk birth defects.

During this research project, I also discovered the repugnant history of the rabbit's foot. The "good luck" charm of the rabbit's foot did not take off until the late 1800s and appears to be a complete bastardization of the gris-gris, holy relics, and Voudou. The early advertisements of these charms are such evil pieces of ethnic propaganda that I won't repeat them.  Just note that, really, a rabbit's foot is a bad symbol of luck.

In fact, there were only two pieces of "positive" rabbit lore I could find.  If you wear rabbit skin socks, you will not get pleurisy and if you feed a child a rabbit's brain, you will improve their behavior and I can think of much easier ways to solve both problems.