The Executive Committee Range - The Corner Office of Antarctica 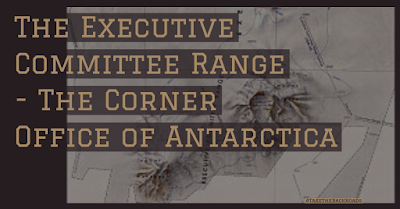 I read about an odd mountain range called "The Executive Committee Range", and I have to admit, the name had me intrigued.

It sounds like where the secret organization who rules the world hangs out, right?

Even more ominous-sounding, this mountain range is completely isolated and currently doesn't belong to a single country.

Does this sound like an even more promising for the location of a hidden lair?

In 1939, the United States Antarctic Service Expedition was created using resources and personnel from the US Navy, State Department, Department of the Interior, and the US Treasury.  The expedition was also funded with private donations. The objective, per order from President Franklin D. Roosevelt in 1939, was exploration, experimentation, and the establishment of an east and west outpost.  Most of the exploration was done by air.

The mountain range, in its entirety, was discovered during exploratory flights on December 15, 1940, although Mount Sidley was discovered by Rear Admiral Richard E. Byrd in 1934 during his Second Antarctic Expedition.  The mountains of the range, with the exception of Mount Sidley, were named after members of the executive board which governed the expedition.

The entire range is volcanic, and seismic readings have indicated that there may be magma churning under Mount Sidley, although no one is really sure. Of all the mountain ranges on the planet, this one is one with almost no data. The mountain range is incredibly isolated and hadn't even been summited until 1990 (by New Zealander Bill Atkinson).

The expedition was largely a success, the bases were established and until 1941, meeting exploration and research targets.  Unfortunately, WWII cut the project short and by March of 1941, the entire team was evacuated.

Even now, Marie Byrd Land, the area the range is in, is largely untouched and mostly unclaimed by any sovereign state, although setting up housekeeping would be a challenge.