Don't Spit In the Soup - A Nesting Instinct 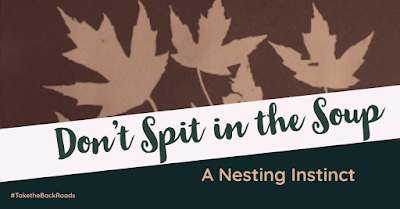 Depending on the quality of the main ingredient, a good bowl of Bird Nest Soup will put that kind of dent in your budget.

When I first heard of this soup, I pictured a small bunch of twigs and mud floating in broth, and couldn't, for the life of me, imagine its appeal, much less its price tag.

As it turns out though, the nest of the swiftlet bird doesn't use any type of twig or mud. They are made out of spit. Seriously. And while that doesn't sound all that appetizing either, I do eat honey, with is another salivary product, so I feel I should at least give Bird Nest Soup thoughtful consideration.

The nests are the product of the swiftlet, a cave-dwelling bird species, mostly found in South Asia, and, unlike most birds, can use echolocation, like bats.  The nests are created by the males, on cave walls, over a period of about 35 days. The nests are formed in the shape of a small cup and are made by layering "salivary threads"

These nests are harvested and simmered in a broth, which dissolves the nests into a gelatin type substance.  I have read that the nests themselves don't have much flavor, so the soup is said to be bland, but then for most, the soup is consumed as a health tonic.

The nests are high in iron, calcium, potassium, and magnesium.  Chinese medicine considers them particularly good for the skin and as an immune system strengthener and qi balancer, which keeps the soup in high demand throughout China.

The nests used to be harvested from the caves themselves, now, particularly in Indonesia, Malaysia, and Thailand (the largest exporters), the nests are farmed in cement towers, making it safer for the collectors, and allow for the birds to complete a mating cycle, which is no longer happening in the wild.

Still, despite the commercialization, I don't know if/when I will ever try this soup. The current price is still around $100 an ounce and I just can't get past the spit.