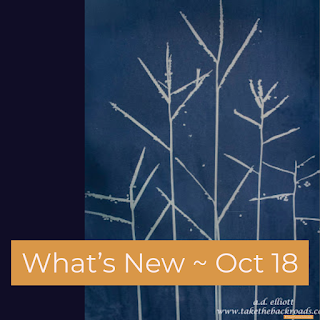 There were a couple of cold days this week and I felt like I spent the entire week huddled inside.

The leaves are just barely getting color, with the dogwoods currently stealing the spotlight.  I was able to catch the light on a couple of caterpillar eaten leaves, streaked red.  I think it makes a lovely 16 X 20 print. Another newly created print is The Stairs at Devil's Den, and I really like how that one turned out.

During one of my walks, I stumbled upon a patch of crabgrass grown tall and gone to seed.  Fish is going to kill me for bringing crabgrass seeds next to his lawn but I do like the way the stalks and seeds appeared in cyanotype and I think it made a striking 11 X 14.

During my research on early Navy Aviation, I discovered the story of Admiral Marc Mitscher, who not only helped develop the catapult systems used by aircraft carriers, he was also in command of the USS Hornet during Jimmy Doolittle's Raid. I also found Sergeant Joseph Bongiorni from the 14th Quartermaster's Division who was a casualty of a scud missile attack during Desert Storm/Desert Shield.

I also managed to get in some "light" reading, finishing both Carl Jung's Dreams, Memories, and Reflections as well as the Greek classic "Agamemnon" by Aeschylus.  I think I may find some lighter reading in the coming weeks.

All in all, it turned out to be a pretty productive week, in spite of the chill in the air.  Perhaps I should get forced inside more often.