Terror on Ice - Solving the mystery of HMS Terror 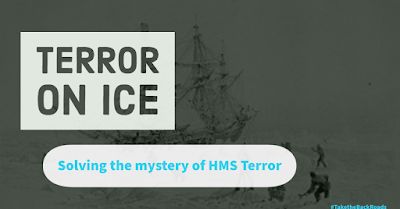 Today I fell into the rabbit hole of arctic explorations, the tale of HMS Terror, in particular.

You would think that with a name like "Terror" the boat would have been doomed from the beginning, but she has turned out to be a stout little ship.

Built for the British Royal Navy in 1813, HMS Terror participated in the War of 1812 naval Battle of Baltimore and in the Bombardment of Fort McHenry (we shall forgive her for this).

It was during Sir John Franklin's attempt to clear the Northwest Passage that she was lost. She left England, along with HMS Erebus, in 1845 and then, nothing.

There have been many expeditions looking for the both of the boats and the crew, the first occurring in 1848 (at the strong urging of the Lady John Franklin) and again in 1850 a large expedition, consisting of 13 ships, 11 British and two US, found the graves of three expedition members on Beechy Island, some artifacts, but no real documentation or ships logs.

An overland expedition to King William's Island, headed by John Rae in 1854, yielded much more information.  There he acquired quite a few artifacts and a lot of testimony from the area Inuit tribes. There was strong evidence that many of the expedition's crew had survived, at least for a while, but still, none of the logs were recovered.

There were subsequent expeditions in 1859, 1860, 1869, 1878, and 1880 which gathered a great deal of Inuit testimony, artifacts, and the gravesites of most of Franklin's expedition crew, but frustratingly, no logs.

The lack of journals or any kind of written documentation is rather unusual.  The men on this expedition were seasoned explorers and disciplined notetakers. That there was nothing more than the occasional note ever found has been puzzling to most of the searchers (and probably the reason the mystery of this expedition endures).

The furor surrounding the expedition died until 1981 when Owen Beattie began the Franklin Anthropology Project, which throughout 1981-82 and again in 1984-1986 examined the skeletal remains and artifacts to try and discover what happened.  The autopsies discovered that the crew suffered from the causes of death one normally associates with "stranded somewhere with no food" (pneumonia, scurvy, malnutrition, cannibalism).

The autopsies also discovered the crew had suffered from severe lead poisoning, which would have increased the effects of starvation.  The post-mortem examinations revealed enough lead in the crew's systems that they would have been suffering from the neurological and psychological effects of lead poisoning, which was likely another contributor to this expedition's failure. It turns out that the solder in their tinned food had been leaching lead into their food. This explains why this expedition had gone so much worse than Shackleton's Antarctic expedition failure.

Still, there were no logs and no boats.  No one had yet found the faintest trace of the boats.

In the early 90s, David C. Woodson and Brad Nelson created "Project Ootjoolik" and ran extensive searches in 1992-1993 but turned up nothing and the 1997-2003 "Franklin 150" expedition founded by the film company Eco Nova also found nothing.

It wasn't until September 2014 that the Victoria Strait Expedition found the wreck of the HMS Erebus and September 2016 that the Arctic Research Foundation found the HMS Terror.  Both ships were located using sophisticated technology and the careful combing of the Inuit testimony  - which largely narrowed down the location of the ships.

While the HMS Erebus has largely deteriorated (the Canadian government was able to salvage the bell) the HMS Terror is largely intact and contains a lot of artifacts, including what looks like logs.

Maybe soon the world will know what happened to Franklin's Lost Expedition.