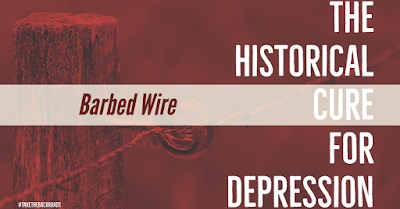 Would you believe me if I told you that barbed wire once cured depression?

Maybe I should explain.

Prior to 1874, when Joseph F. Glidden patented barbed wired it was difficult to corral livestock (there was a previous patent held by Lucien B. Smith which inspired Mr. Glidden, but it wasn't commercially available until after 1874).

Wood and/or rock fencing was prohibitively expensive (both in cost and in labor hours) and living fences (like India's giant hedgerow) were too challenging to maintain over large areas for the average small rancher and couldn't contain a herd of cows anyway.

Barbed wired changed that completely, it was very cheap to buy and very easy to set up and. most importantly, very good at containing cows.  The importance of barbed wire to the United States westward expansion and to the development of agricultural strength can not be understated.

However, as people began to move into the far reaches of the West, settlers were plagued by loneliness. Homesteading during this period was a lonely, isolating venture (Hernan Diaz fictionalized this well in his book "In The Distance") and, in most cases, your nearest neighbor was, at least, a mile away (a doctor was probably farther).

Barbed wire helped manage that feeling of isolation, or rather the barbed wire telephone system did.

While many people point to the telephone (patented in 1876) as being the key technological development, I disagree. The actual telephone system itself was, again, prohibitively expensive for the rural rancher and there wasn't a telephone company that was willing to run telephone wire to the panhandle of Texas.  Instead, rural farmers borrowed the idea of the phone and hooked them to their barbed wire fences.

Because the steel in the fence would conduct both sound and electricity.

Of course, this was the ultimate party line.  All the phones connected to the line would all ring when someone tried to make a call  - there was supposed to be a code of rings and other ways to identify who the call was for but really, who are we kidding?  If you were talking on that line, you were talking to EVERYONE on that line.

It was quite the boon and allowed these rural farmers to stay connected and dramatically reduced the instances of "melancholia" and "apathy" that can occur when people are isolated.  In fact, the system worked so well that in 1912 there were significantly more rural barbed wire phones than urban landlines (despite the thriving Wall Street financial district).

While I kind of like the idea of a "neighborhood" line (great survivalist idea) -  I think I am going to stick with growing a hedgerow.