A Flock of Flamingos is a Flamboyance 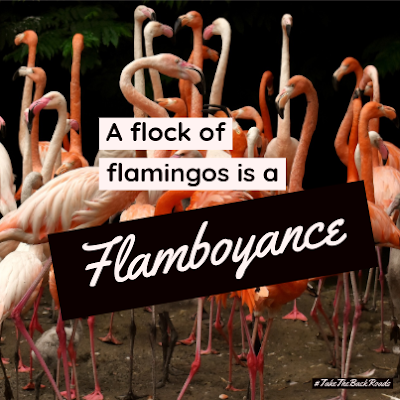 Today I read what a flock of flamingos is called and fell in love with the term.

Of course, it also reminded me of my favorite flamingo - Flamingo 492 - the Kansas flamingo that broke out in 2005 and has haunted the Gulf Coast ever since.

While I applaud the bird's bid for freedom, I wonder if it's lonely.

492 (a South-African flamingo) has been known to associate with a flock of the Gulf Coast Caribbean flamingos but doesn't remain with them always.  It has just as often been seen alone (and as far north as Wisconsin).

Flamingos are such social birds, with colonies that can number in the thousands.  The birds like to form couples as well, oftentimes mating for life and I can't help but wonder if this poor flamingo is lonely.

In any case, the bird has struck a chord with me and I am always on the lookout for new sitings and information about it.

I think its story would make a good children's book.