Can You Catch a Falling Star? The Odds of Finding A Meteor 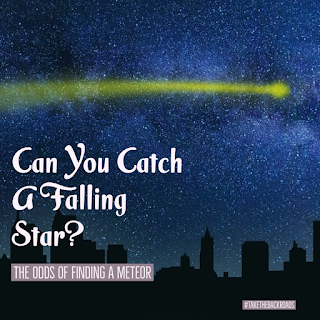 A couple of weeks ago, while trying (and failing) to photograph the Perseid meteor shower, I saw the hugest meteor ever, like it was almost close enough to touch, huge.

It was beautiful and stunning and I didn't even think to try and photograph it (plus the camera was facing the other direction).

Anyway, I was sure it landed close by or at least sprinkled meteor dust everywhere and I wondered how hard it was to find a meteor.

Turning to Google, it turns out, finding a meteor is pretty hard. According to the Meteoritical Society, there have only been about 1,800 found since 1807. That is a very daunting statistic, so never mind, I won't be looking for any.

Poking around further into all things meteor, I discovered the American Meteor Society website, which has a great many resources on the timing and peak dates of these showers.

They also collect information on fireballs, which is apparently what I saw - on August 11th.