Polly and Her Crackers - Points About Parrots 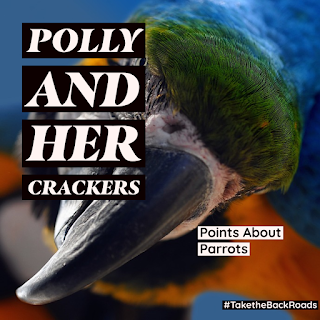 This morning I found myself flying into the colorful world of parrots after I read about the discovery of a fossilized parrot skeleton found in New Zealand.

The parrot discovered, named Heracles Inexpectatus, would have been about three feet tall.

The article mentioned several times that this parrot was the size of a small child and I hadn't realized until this article that parrots were a bird to be feared.

As it turns out, parrots are a raptor and are carnivorous.  For example, a current species of parrot in New Zealand called the kea, has been known to regularly attack and takes bites out of living sheep.

They are smart too, and like ravens, can remember, mimic, and hold a grudge.  They also have a dominant foot and can be "right or left-handed".  Parrots are monogamous and appear to mate for life, although they are difficult to study in the wild.

One of the most important things I learned about parrots is how bad it is to keep them as pets - at least for most people.  The birds live a very long time and will probably outlive an owner and because they are intelligent, they aren't low maintenance pets.  A parrot will require a large cage, a constant supply of enrichment toys, and a very patient pet-parent, as the birds can easily become temperamental and will screech and bite.  This isn't a pet to adopt on a whim.

While there aren't any species of parrot native to North America, there are now wild (feral?) populations in California, Texas, and Florida.

I may look for some "wild ones" the next time I travel.