Teeming With Ticks - The Veracity of These Voracious Vermin 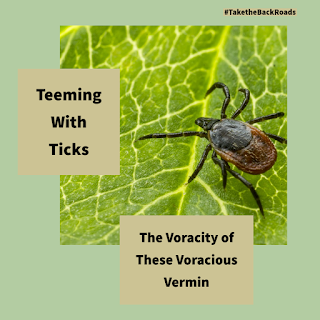 Over the weekend one of my mystery bulbs bloomed - it turns out they were abyssian flowers and then it rained and I was able to get a gorgeous macro photograph.  It is available at the Shop.

That is the good news.

The bad news is that I have had the opportunity to do an in-depth study of ticks this weekend.

It seems ticks have been the bane of the earth since the beginning of time.  They even fed on dinosaurs.

They only serve two functions on this planet - as a food source (guinea hens and opossums love them) and as a form of population control, because ticks are great disease vectors. According to the CDC, ticks can transmit at least 16 different types of "bugs" (bacteria/virus/parasite) and while most of these bugs will cause symptoms resembling the flu, there are a couple versions of rickettsioses - Rocky Mountain Spotted Fever is the most famous - that can be fatal.  The bacteria transmitted by tick bites is also responsible for the chronic illnesses Lyme disease and STARI.

Ticks have also created a new source of hell called alpha-gal syndrome - a tick (the Lone Star) will inject a sugar molecule into the bloodstream, which will create an immune response to red meat, including hamburgers, including steak, and (gasp) including bacon.

I was aware of the disease-causing capabilities ticks possessed before this weekend.  What I didn't know is that it is possible for ticks to wreak havoc on a person or animal by blood loss and/or "overwhelming" a host system by sheer numbers.

Yes, there have been instances of "death by a swarm of ticks".

Ticks lay several thousand eggs at a time and when they hatch they will remain clustered together for a short time.  It is possible to brush up against these clusters and be exposed to several thousand ticks at once. The good news about this type of encounter is that the ticks have not had a chance to catch any diseases. The bad news is that you will find yourself covered with hundreds of ticks. My poor son ran into one of these clusters over the weekend and, after the removal of more than 100 ticks, is an itchy mess but should be ok in a couple of days.

Prevention is the best medicine where ticks are concerned - long pants, long sleeves, and if you are prone to bites, lots of DEET.  It has been my experience that people who are attractive to mosquitos will also be attractive to ticks.  Fish is one of these people and he has had some success with taking oregano oil supplements to make him less attractive, but he still won't go into the woods without repellant.

We are also looking to adopt a few opossums in our forest.