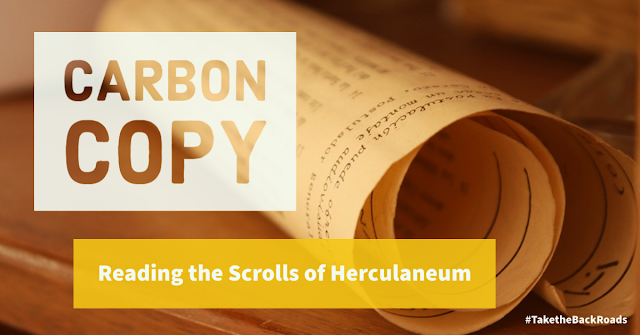 The new technological developments never cease to amaze me (particularly those related to digital imaging), and, because this development could open up an entire library of books, I am doubly excited about it.

As you probably know, very little ancient literature survives and much of what we do know about those ancient books (er, scrolls) have generally come from referrals to them or quotes from those documents in more recent written (but still old) books.

I think almost every reader, book lover, and historian mournes the loss of the Alexandria library and the estimated 700,000 books that were lost in its burning (at least I do), there is however another, much, much, smaller, ancient library that has the potential of being recovered.

With the ruins of Herculaneum were found about 400 scrolls, tightly wound and covered with ash from the Vesuvius eruption of 79 and now, with the development of high-resolution CT scans and a software tool that digitally unwrap the scrolls,  it looks like it will soon be possible to "read" these ancient texts.

In 2016. this technology was able to successfully read a charred scroll from Israel - which turned out to be an ancient copy of the book Leviticus.

So far, the carbon has presented some challenges in the Herculaneum scrolls, but the archivists on the project feel they will soon be successful.

While these scrolls won't replace the Alexandria library, I hope they will provide a glimpse into ancient literature.