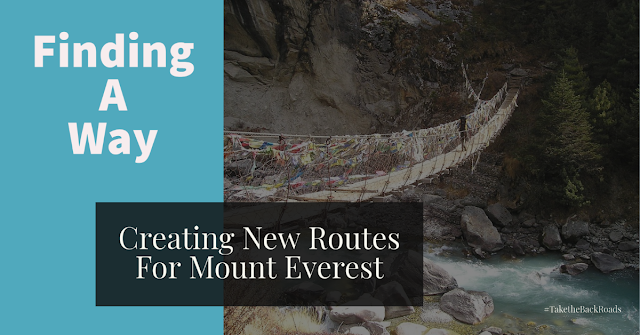 I am sure that by now you have seen the photo of the lines getting to the summit of Mount Everest.

Part of this congestion is caused by the lack of routes to the summit, while there are currently 20 named routes to the top, only two are feasible for the guides and widespread use.

Those two, especially in recent years, as mountaineering has become more popular, have seen heavy traffic.

Two guides, Cory Richards and Esteban "Topo" Mena are trying to ease some of that congestion.  They are creating a new route to the summit.

The process, due to the narrow climbing window and the difficulty of the undertaking, it may take several years for the route to be established.  The process is painstaking, slow, and quite dangerous. When it does, it will hopefully ease up the traffic jams to the summit.

As a side note, I noticed that Topo Mena worked as a guide for Alpenglow Expeditions, an expedition company that does NOT use supplemental oxygen for their Mount Everest expeditions.   After reading Jon Krakauer's book Into Thin Air, I too question the widespread use of supplemental oxygen on Mount Everest.  It is a much slower acclimation process but seems to be the safest - not to mention that it reduces the amount of garbage on the mountain. I am glad that Alpenglow has adhered to this philosophy.

While climbing Mount Everest will never be a safe adventure, I hope this new route will reduce the wait times to the summit. It seems a shame to climb so far only to wait in line.