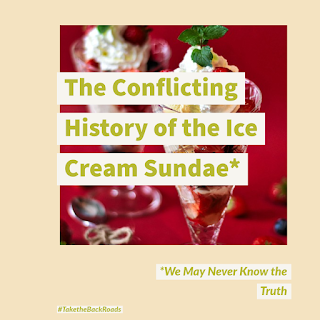 Do you like ice cream sundaes?  Have you ever wondered how they came about?

The first advertisement to the first-ever ice cream sundae, leads to an ad in the Ithica Daily Journal on October 5, 1892, offering an "Ice Cream Sunday".

However, there are two different "First Sundae" stories.

One "First Sundae" claim happened in 1881, in Two Rivers Wisconsin.  Druggist Edward Barnes received an order for a (forbidden) ice cream soda on a Sunday. In the spirit of good customer service, Mr. Barnes instead served the ice cream (sans soda) in a dish drizzled with chocolate syrup.  It is important to note that in 1881, Mr. Barnes would have been a mere 18 and quite young to have been trained as a druggist, but, still, it could be possible.

Ithica New York's "First Sundae" happened in 1892 when  Reverand John Scott ordered a dish of ice cream after church.  Chester Platt, the owner of the Platt & Colt Pharmacy, went the extra mile for the Reverand, topping the dish with cherry syrup and a maraschino cherry.  Of course, Ithica has a newspaper advertisement to give backing to their claim of "First Sundae".

I personally suspect, that once we (as humans) managed the technology to create ice cream on demand, we immediately begin putting things on it "Sundae style".  Where do you think the first sundae came from?