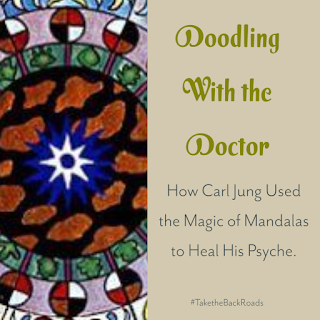 I am currently reading Carl Jung's autobiographical musing "Memories, Dreams, Reflections" and I discovered something very interesting about Dr. Jung.

He liked to doodle.

Dr. Jung began drawing during a period of struggle within his own psyche and noticed that the circular patterns he would draw resembled the mandalas of Hinduism, and adopted the phrase for his (and his patients) drawings.

Dr. Jung came to believe that the mandalas represented his "Self" at that moment and he believed that they helped re-balance the psyche.  He would continue to use this tool throughout his entire practice.

It is interesting to note, that rhythmic, repetitive, doodling seems to span all cultures.  Not only are they found in Hinduism, but mandala-like drawings are also found in the religious philosophies of Buddhism, Shintoism, and Jainism. Additionally, many of the stained glass windows and illuminated manuscripts of early-Christian works also invoke the rhythmic placement of mandalas.

The mandalas have also been found in early Meso-American civilizations, like the Aztec Sun Stone.

Dr. Jung's doodles were made in a red leather journal called "Liber Novus" and was, for the longest time, unavailable for viewing. However, in 2009, the book was published by his grandson Ulrich Hoerni to benefit the Philemon Foundation.

I think I found my next book.