Iguana Cuisine - Eating the Chicken of the Trees 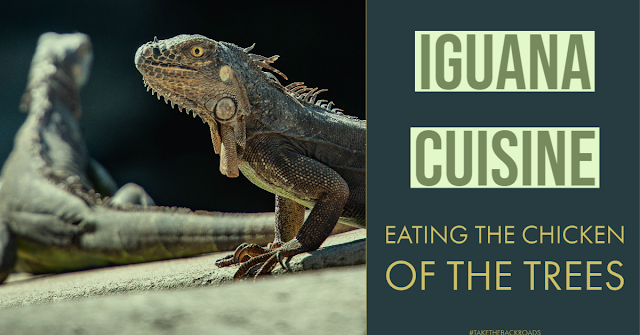 Have you ever heard of the green iguana?  A common reptile in Central and South America, it has now become an invasive species in the Caribbean, Puerto Rico, and Florida.

In Florida, the iguana problem is especially bad.

The green iguana lacks a natural predator in Florida and their population has exploded.  Their burrowing nests will undermine sidewalks, building foundations, and roadways.  They grow up to six feet long and they poo everywhere.

Florida has declared them a nuisance and is encouraging homeowners to eradicate any they find.

To help encourage Floridians to take part in the widespread culling of the iguana, it's culinary capabilities are being publicized.

A quick internet search brought up a bunch of recipes - from an Iguana Pazole found on eattheinvaders.org to Guyana's Iguana Stew and it appears that any chicken recipe could be easily adapted.

I like the exploration into different and atypical food sources, especially since hunger has become such a problem worldwide.

Although I am not going to find/kill/clean/cook one of my own, I may have to give iguana tacos a go if I find a restaurant that serves them the next time I travel to Florida.