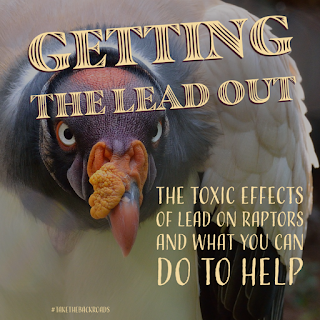 I read some good news about the California Condor.  This year, the 1000th chick hatched.

While I knew about the wildfire started by Johnny Cash which almost drove the critically endangered birds to extinction,  I didn't know what caused the population of the birds to decline in the first place.

It turns out that the biggest nemesis for vultures and other raptors isn't urban spread or DDT but lead poisoning.

Lead poisoning is affecting more than just the condors and other vultures.  All raptors (including the Bald Eagle) are struggling with lead toxicity.

Because the birds are carrion eaters and opportunistic feeders, they eat everything, including the remains left over by hunters and that is where the problem is.

The pellets from shotgun shells are toxic to birds of all kinds and when raptors feed on these carcasses they begin to suffer and die from lead toxicity.

The easiest solution would be to eliminate the use of lead pellets in shotgun shells, however, so far, that hasn't been a feasible option.  Alternative metals are often much more expensive and don't have the same ballistic properties, leading to unpredictable fire patterns.  These types of bullets can also be unsafe in many of the older shotguns.

The other option is ensuring that no carcass is left behind. Including coyote, including squirrel. It is also important to ensure proper disposal of entrails during the butchering process.

I am excited to hear about the bird population rebounding and hope that we can halt the wide-spread species extinctions Elizabeth Kolbert describes in her book the "Sixth Extinction".