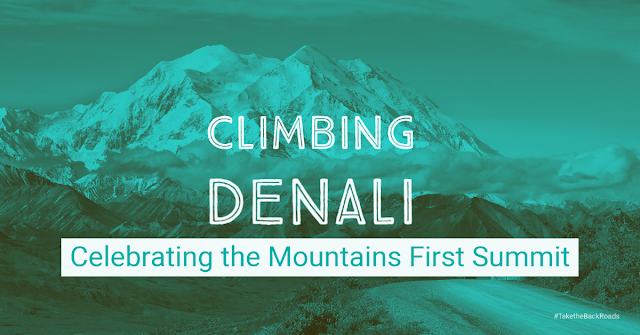 Have you ever thought about mountaineering?

Social media has been flooded with pictures of the tourism on Mount Everest, with the lines, the guide ropes, the garbage and I wonder how crisp and clean the summit used to be in 1953.

In other mountaineering news closer to home, today marks the 106 year anniversary of the first ascent to Denali's summit.

The climb was first done by Hudson Stuck, the archdeacon of the Yukon Episcopal Church, and friends, Harry Karstens, Walter Harper, and Robert Tatum.

I can't imagine how beautiful (and cold) that would have been and I can't imagine the feeling of knowing that you were the first person to arrive there and witness something so untouched.

Another fact that impressed me most the story of Denali's first ascent was Hudson Stuck's insistence upon calling the mountain Denali.

The mountain was named (by non-native settlers) Dunsmore Peak in 1889 and then re-named Mount McKinley, in honor of the president in 1896.

So, at the time of the climb, the mountain was actually called  Mount McKinley.

Denali, meaning "The High One" is actually the Athabascan tribe name.  Hudson Stuck's religious duties included missionary duties to the native tribes in the area and he always respected and used their names for their local places.

The mountain  "officially" reverted its native name in 2015.