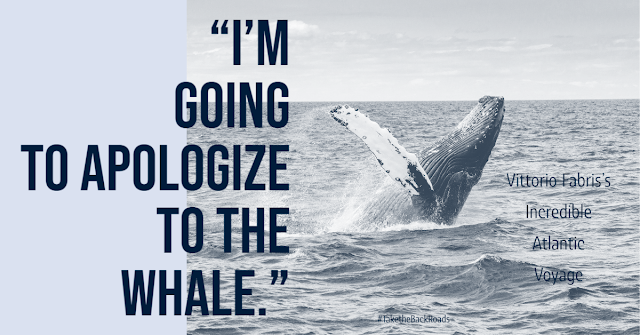 I love reading about adventures and the adventure of Mr. Vittorio Fabris is definitely a good read.

He left Venice in his small boat named Mia,  which he had draped with an "I'm going to apologize to the whale" banner. He also brought a statue made by sculpture Carlo Pecorelli to donate to the Nantucket Whaling Museum.

His trip was plagued with mechanical problems and forced stops in the Azores, Gibraltar, and the Canary Islands before having to reroute his course to Cape Verde to avoid hurricane season.

Finally, when Mr. Fabris was in the bay, 1,500 feet from Nantucket, his boat capsized.  The towboat was housed out of Cape Cod, and towed the boat there, instead of Nantucket.

Mr. Fabris did eventually make it to Nantucket and the museum and after some initial struggles with language (Mr. Fabris doesn't speak English and it took time finding a translator), his mission was completed.

He is now trying to get back to Venice for his 78th birthday and plans to write a book about his trip.

I hope the book gets translated into English because it sounds like a great whaling adventure.