Racing Mr. Ed - All About the Man Versus Horse Race 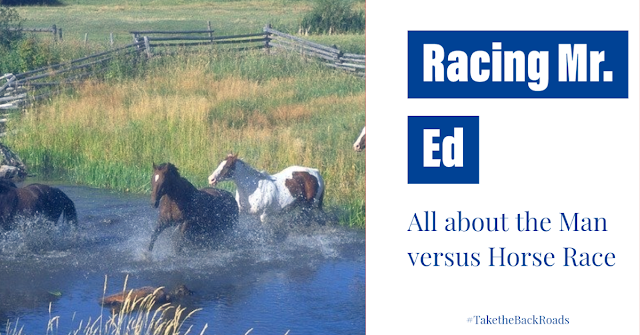 I have just heard about the most fun race ever.

It is called the Man Versus Horse Marathon.

The race began much in the same way that "Around the World In 80 Days" did as a conversation/debate/bet in a pub.

The debate that started the race occurred in 1980, in a small town called Llanwrtyd Wells in Wales between two men at the Neuadd Arms pub.

The question, whether a long-distance would negate the speed of a horse and allow a human runner to win a race, was put to the test by a local landlord and owner of the pub, Gordon Green, who insisted upon the test being in public view and with an official course.

The race, covering 22 miles through the Welsh countryside has been taking place ever since.

To date, only two people have ever won the race - once in 2004 by Huw Lobb and once in 2007 by Florian Holzinger.  This year, ultramarathoner Michael Wardian will be giving it a shot.  He feels pretty hopeful.

In addition to this race in Wales, there are two others, one in Scotland and one in New Zeland and although I don't run marathons, I may someday check out one of these races.