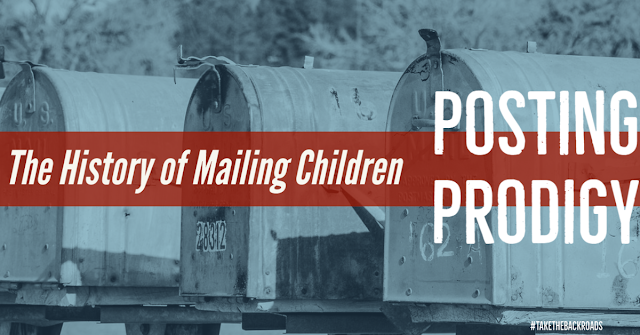 Did you know it was illegal to send a child by U.S. mail?

Fish and I discovered this odd fact while stuck in traffic behind road construction (I love smartphones) and we tried to figure out how exactly this law came to be.

On January 1, 1913, the U.S. Postal Service began offering parcel post services - paving the way for the Amazon boom that is going on today.

Of course, issues with parcel post regulations rose immediately as, within weeks of this service opening up, Jesse and Mathilda Beagle mailed their son infant son James to his grandmother's house.

It wasn't an isolated incident.

The most famous of the "mailed" children was that of Charlotte May Pierstroff, who at the age of four, was mailed 73 miles in February 1913.

By June, the post office had had enough and put a kibosh on the whole adventure, but, for a few brief months, you could send your child to their grandparent's house for the cost of a stamp, rather than a train ticket.

I wonder what Child and Family Services would have thought...