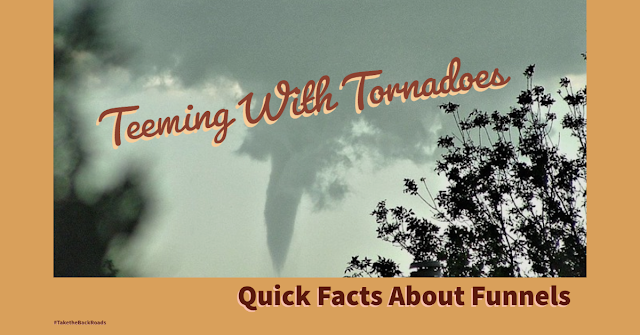 There has been some crazy weather this Spring/Early Summer and the news has been full of weather-related facts.

One fact, in particular, caught my attention - probably due to the most recent weather patterns in my area.

The U.S. has the greatest number of tornados in the world, at approximately 1,200 a year. Most are concentrated in the famed "Tornado Alley", although they can occur anywhere.  The South American continent also sees a bunch, particularly in Argentina, Paraguay, and Uraguay.  While other countries have had severe tornados occur, the American continents seem to be where tornados happen regularly.

1,200 seems like an awful lot of tornados and two facts stood out to me.

1.  Tornado season runs until about the end of June, we still have a few more weeks of this weather nonsense.