Etiquette and the Island of Sark - The Dame Defeats the Nazis 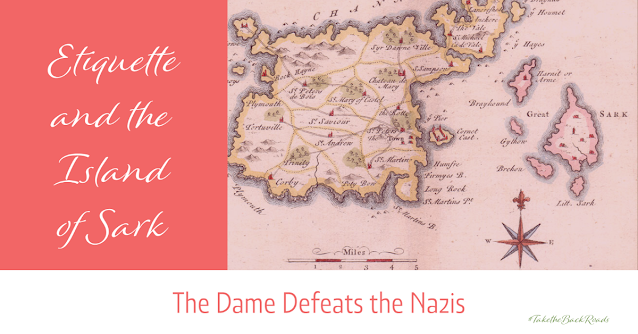 I love stories where etiquette foils the enemy.  Like the Angels of Bataan and Corregidor, who forced the enemy guards to spend their entire inspection times bobbing up and down because they would stand just far enough apart that etiquette demanded a re-bow.

In these stories, I have found many heroes. And after reading about the WWII occupation of the British Isle of Sark, I have found a new hero in Dame Sibyl Hathaway.

The Isle of Sark is one of the channel islands, and therefore one of the first grabs of Nazi occupation. Considered to be the last feudal lord,  Dame Sibyl Hathway refused to allow her subjects to evacuate and instead carried on, business as usual.
Even when the Germans landed.
In quite a twist of etiquette and absolute gumption she sent down to the landing site and had the officers brought to the house as if they were mere guests.  From the rest of the occupation, she exploited the formalities of European noble etiquette, including insisting upon the occupying soldiers stand when she entered a room and on having her hand kissed.
And it worked.
While her subjects were quite angry when she insisted they stay on the island, and resources were very strained, the island, most of its people, and most of the buildings, all survived the war. Other channel islands weren't so lucky and many people returned from evacuation to find everything destroyed by the occupiers.
Almost all of the protection she offered was done by behaving like an aristocrat, demanding the occupying soldiers treat her like an aristocrat and adhere to that etiquette and style.